Is MiQuale Lewis The MAC's Most Disappointing Player?

Share All sharing options for: Is MiQuale Lewis The MAC's Most Disappointing Player?

Everyone's got expectations. You got 'em, I got 'em. My expectations for Hustle Belt was 1 million hits per day, and to retire to my own Polynesian island by 2011. I ... don't think I'm on pace for that. However, Ball State's expectation for senior running back MiQuale Lewis, heading into the season, was likely to be one of the top running backs in the MAC. That's not the case.

Let's dig into the numbers:

And this year? Just 189 yards on 55 carries (3.4 yards), which is dandy enough for 20th in the conference, but more astonishingly, fourth on his own team.

Let's even take away that '08 season, because it was magical for everybody involved. Only Bernard Pierce and Chad Spann had more rushing yards among non-seniors. So MiQuale Man has to be the most disappointing player in the MAC, right?

You can thank Eric Williams, David Brown and Cory Sykes for hogging the ball in lieu of Quale. The Fort Wayne News-Sentinel did a story on him this week, saying he turned a corner in the WMU loss by posting 64 yards on 12 carries. However, remember when he ran for over three bills in one game last year? He's still a whole football field-length shy of that for 2010.

The N-S story mentioned that Lewis still needs 480 more yards to become Ball State's all-time rusher, which seemed like a lock barring injury this year. They have six more games ... 80 yards a game? I don't know about that, even if Parrish has alluded to leaning on him more and more in the second half of the season.

The corner may be turned, but before we anoint him officially back, it may be necessary to, ohidontknow, get a substantial number of yards and lead his team to a win. That 300+ yard game last year was against EMU. And, oh, hey, look who they play this Saturday.

Who else would be considered a greater disappointment? Temple's Pierce and Toledo's Eric Page are coming off stratospheric freshman seasons, aren't on pace to match '09's numbers. But they each are battling forces beyond their own performance — Pierce with the bum ankle, and Page with the struggling quarterback throwing it to him. Meanwhile, Kent State senior safety Brian Lainhart, who led the MAC with seven interceptions, has nada this year.

There are probably others. But mostly, we're just waiting for our MiQuale Man to show up and save us all. 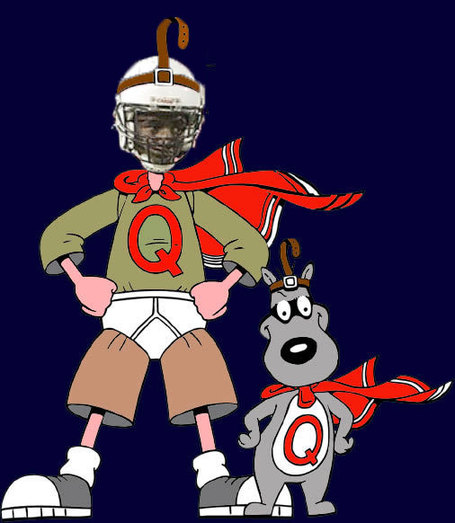