Share All sharing options for: Miami 23, Temple 3: Cradle of Quizzicality


Before the season began, The Owl's Nest solicited thoughts about all things MAC football. One of the questions was about what the biggest surprise would be. Looks like this blind, deaf and dumb guy sure found a mean prediction:

Kent State plays all the right teams at home, and they don't play NIU at all. Eight wins is very possible for them. But is that really surprising? It would be more shocking if, say, Miami won five conference games. Why? Because they're annually irritating and seem to win when they're not supposed to.

You've probably heard the scenario already If Kent State and outgoing coach Doug Martin goes balls out and beats OHIO on Friday morning, then Miami is in the MAC Championship game. Otherwise, if the Bobcats do what they oughta, it's still an 8-4, 7-1 season for the RedHawks.

Maybe Temple didn't have much to play for. A ninth win? Sure ... but their effective season was washed away in a torrid downpour. They were playing for, maybe, a better bowl resume, a feat which may be moot, because there are probably some board members out there who prefer the ratings sex appeal of Temple over Miami regardless. At least they appeared to play like it was a meaningless game tonight: 215 yards of offense, four turnovers, two failed field goals, and seven sacks allowed.

Miami, meanwhile, is not playing like a superstar team either — they still seem like the type that'll get killed by a good AQ program — but they're playing hard (hustle!) and it seems like the rest of the conference has sort of played down to them. "Aw, it's Miami. Young quarterback, not a lot of playmakers, and an injured defense." Well, the backup quarterback Austin Boucher was basically a Zac Dysert doppelgänger. Thomas Merriweather had plenty of tough runs, even before the 96-yarder. The defense did their thang. Penalties were kept to a minimum (3 for 15 yards). The coaches did theirs. The fans (were there really 13,235 there?) played their part. And now they're 7-1 in the conference.

Further attempts to fathom this have failed. They can't be better than Ohio, because Ohio creamed them. MU beat Akron by five, Bowling Green by three, and lost to Big East patsy Cincinnati by 42. Speak o' that numeral, they've scored 42 fewer points than they've given up on the season. They've scored 30 points only ONCE this season — 31 against Colorado State. But they've also kept every MAC opponent to 21 or fewer points (except for the lone OHIO loss.) Hey, they earned it, even if rubbing your eyes doesn't provide clarity. This is just the type of season where Miami wins seven conference games.

Accept it and move on. But drink this first. 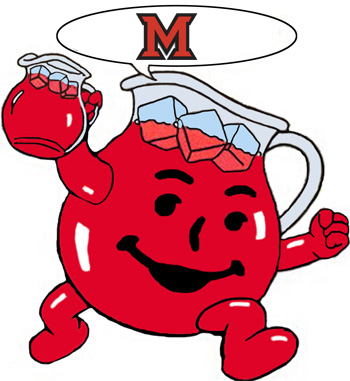