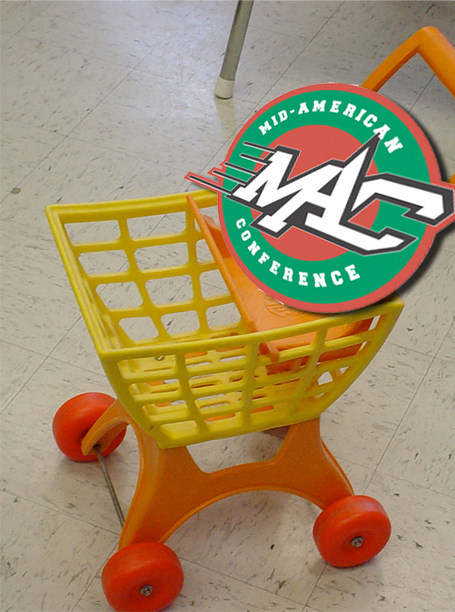 You're not shopping. You're watching these. Because these five games mark the final regular season day for MAC football. Tears. Hugs. Seniors.

11 a.m., OHIO at Kent State (TV: ESPNU) — Gotta watch just one? This is it. Then again, ESPN decided to pick this one up and stream the rest, so it's nice that the networks are deciding for us, and that they were right. You know the situation: OHIO, owning the head-to-head tiebreaker, wins this game and they face NIU in the MAC Championship Game next week. If they lose, Miami wins the division. It's also Kent State coach Doug Martin's final game before his resignation kicks in. If he ever wanted to stick it to a team, this is his shot. And, hell, why not root for chaos. This Bobcats team has been crazy fun to watch when the offense is on, but I think back to Jeff Genyk's swan song with EMU in 2008 when he turned into the penultimate douchebag as his Eagles upset Central Michigan. Martin doesn't have to assholify the persona to make this shocker happen ... he's just gotta empty the playbook and give his offense a puncher's chance. I'M GOIN' WITH THE UPSET. Guess: Kent State 28, OHIO 27

12 noon, Northern Illinois at Eastern Michigan (TV: ESPN3.com) — Ee-yow. Please be gentle to the Fighting Nacho Lovers. But methinks the Huskies won't pour it on. The only reason they might would be to impress the voters so they can sneak into the top 25 come the MACCG. But they don't want to give away any SECRET TRICK PLAYS to whoever they play. Guess: NIU 38, EMU 14

2 p.m., Western Michigan at Bowling Green (TV: ESPN3.com BCSN) — Your storyline for this game is for WMU to become bowl-eligible, and since there may not be enough qualified teams, this might guarantee the Broncos a 13th game. But ... Zoddammit, the Falcons have never lost 10 games in a season, and I'll be hellraised if it'll happen in my first year blogging about them. Guess: BGSU 28, WMU 20

2 p.m., Buffalo at Akron (TV: SportsTime Ohio, ESPN3.com) — Hey, wanna see a team finish 0-12? Sorry, not this year. The Zips have actually shown a pulse in the last two weeks (three if you count "only" losing at Temple by 30) whereas the stillborn Bulls have somehow moved backwards throughout the season Guess: Akron 17, Buffalo 14

2 p.m., Central Michigan at Toledo (TV: ESPN3.com) — But this game really doesn't have a bunch at stake. This is CMU's final game, and they had two weeks to prepare, but they're 3-8. Toledo is 7-4 and they'll get one more game after this, wherever that may be ... but here's something the Rockets would like to do: snap this five-game losing streak against the Chippewas. Not since 2004 — Bruce Gradkowski's junior year and their last MAC Championship season — have they beaten up on CMU, and you can thank Dan LeFevour for that whole dominance. Consider the streak broken, but watch out for the Mount Pleasanteers in 2011. Guess: Toledo 35, CMU 26

Keep this as your open thread.