Everyone loves bullet points, and that's what you get after this touchdownpalooza:

• And despite all that ground game agglomeration, UT's Adonis Thomas was the leading rusher.

• Okay, maybe Austin Dantin was vital to Toledo's fluidity. It took two quarters for that offense to get started, and when they did, they were able to almost keep pace. In the second half alone, they were outscored just 37-30. But maybe Terrance Owens has potential for 2011.

• NIU's previous high in points vs. Toledo was in 1987 when they routed them 41-5. This means they also missed their most lopsided win over T-Town by a single extra point, which Michael Cklamovski missed on their last touchdown.

• Cklamovski's field goal, which bounced off the left goalpost flag and through, was ironclad empirical proof that this was their night.

• The Huskies scored eight more points against Toledo than Boise State did in their game.

• You gotta rank the Huskies now, right? This was a dismantling, and even though they gave up 30 points, they all came when the game was well in hand. They've now won seven straight and they don't appear to lose until maybe their bowl game, contingent on the opponent. The BlogPoll comes out Wednesday ... THERE'S STILL TIME TO CHANGE THE WORLD. If you need some swaying, have a cool beverage: 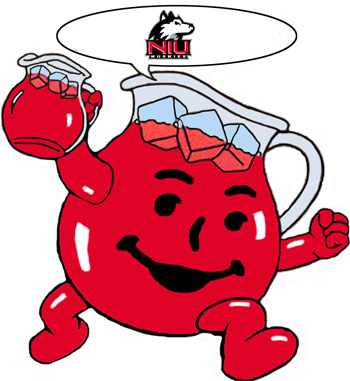 • As for Toledo, they're now 6-4 and desperately out of the MAC championship hunt but still having a more inspired year than most people likely imagined. Plus, they have a date with Bowling Green next week and will, in all likelihood, snap their three-year losing streak against them. The only thing they don't have going for them is their uniform font. Horizontal stretch is so hurtful to the retinas.

• With the lead story in college football being Cam Newton tomfoolery, the ESPN2 crew didn't really want to talk about much else, so the focus was mostly on this game and the MAC landscape. Good on them.

• BG-Miami isn't gonna be nearly as cool as this tomorrow. Doesn't mean we won't watch.