Last night I was thinking about why KFC doesn't sponsor a bowl. Think about this: KFC sells bowls of food, and by the Rule of Homonyms, it's also a televised college football exhibition game. This will happen soon, perhaps somewhere in Kentucky, but for now we can only hope that the marketing prodigies figure this one out. In the meantime, the most delicious postseason game remains the Little Caesar's Pizza Bowl.

No, Little Caesar's doesn't sell any type of pizza in a bowl, although they could probably run the Cup O' Pizza guys out of business. But you can certainly smoosh a pizza slice into a bowl/cone shape, and then fill it with marinara or garlic sauce, and then eat it. You're probably going to enjoy this new-found way of enjoying heat lamp cheese bread.

The Little Caesar's Pizza Bowl could also stay true to what they're best known for: fast cheap pizza. It's not the most flavorful, and it's not the healthiest, but — at the risk of sounding like a commercial — I don't know where else you can walk in and just buy a ready-made pizza and walk out. That's why the December 26 date is so odd. It's an early bowl, sure, but shouldn't this be the first bowl game? Oughtn't it be, like, played the next day after they announce the matchups? This would fall in line with their quickness and their instantaneous gratification. Hey, you wanted cheap football right now. You get Toledo and Florida International.

And that's pretty much what we have with the teams here. FIU comes in at 6-6 and sharing a fraction of the Sun Belt Championship with Troy, even though they easily beat Troy, who routed OHIO. So don't let the record and the conference be a sign that this is going to be easy for Toledo. Remember, Toledo just barely beat OHIO.

Oddly enough, UT and FIU played each other in the last two seasons, with each team claiming a victory inside the other's stadium:

Each Team's Best Player, Who Happen To Be WR/KRs

We'll start with FIU's, because around these parts we're unfamiliar with them.

You can't introduce this team without first meeting T.Y. Hilton, their receiver/returner extraordinaire. His numbers aren't entirely great (816 receiving yards, four touchdowns, one kickoff return TD, 1,879 all-purpose yards) and in fact he didn't lead the SBC in any major category, but the conference dubbed him Player of the Year. But it sounds like he's got the speed, which isn't a statistic, and you might see him in the NFL in a couple years.

What is impressive about Hilton is that he's had big games in many different ways. He had a 158-yard, two-touchdown game on the ground against Troy, an 11-catch, 140-yard game against Arkansas State (which turned them bowl eligible), and then returned a kickoff against Louisiana Monroe. So he'll be difficult to stop.

But not as tough as Eric Page.

Sorry, but Toledo's answer to Hilton can do even more. Page has 14 total TDs: eight he cought, three he returned, and three he threw. (He doesn't, however, take the ball in the backfield, like, ever.) You may remember in their game against CMU, Page was unstoppable and accounted for touchdowns in all these varieties. So either man could take over the game, but more likely its gonna be No. 12.

The Golden Panthers' best asset on their line is their largest hominids. Right in the middle you'll see senior center Brad Serini, who has started every game of his college career, and conveniently the line allows just 1.5 sacks a game, best in the SB. UT's defensive line is good but not great, although T.J. Fatinikun leads the way with 12 TFLs and five sacks.

FIU running back Darriet Perry doesn't have a lot of speed, but he is durable and will try to wear down the defense and run behind his blockers. The Rockets have been susceptible to a decent running game, as Ball State and Kent State gave them fits this year. And then there was, of course, the time NIU rolled up 422 yards on the ground against them. Probably not their proudest night.

You won't see the passing come alive under Wesley Carroll, but you might remember him — be you an SEC football fan — from the 2007 Mississippi State team that won the Liberty Bowl. Well, he's at FIU now, and throwing 15 TDs to 13 picks this year. Even with a guy like Hilton to throw (or hand off) to, and with Greg Ellingson who leads the team with five receiving TDs, there's little of the ordinary to worry about. But UT does rank near the bottom in pass yards allowed per game(238.9), but fortunately they're mighty good at picking off the ball, as annotated by 19 interceptions.

This matchup is way better anyways. We'll begin with the quarterback spot, which belongs to fill-in freshman Terrance Owens, and he's been all you can ask for in an injury replacement. (Austin Dantin, who was lost in the Eastern Michigan game, might still play a bit in the game, but it's mostly T.O.) Page is the main target, but tight end Danny Noble is a popular red zone target. Now this is where FIU excels. They lead the Sun Belt in defensive pass efficiency — their opponents completed just 54 percent of throws and only mustered 18 total touchdowns. That's not a lot of aerial mustard.

I could delve into the stats, but why bother when the names are gonna outshine the raw numbers? So here's the LEGENDARY NAME-ON-NAME MATCHUP: Toledo running back Adonis Thomas vs. FIU linebacker Toronto Smith. A visual representation of the showdown: 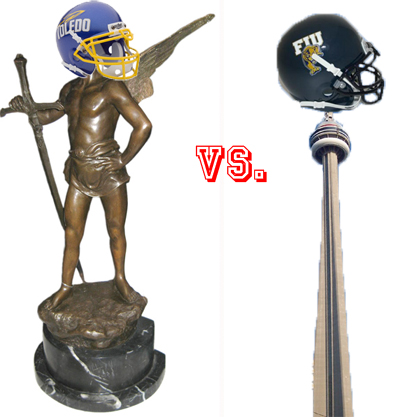 So while FIU's defense is the top rated in the Sun Belt (in rushing defense, total defense, and scoring defense), Toledo has scored at least 30 points in their last six games.

Both of these teams rank last in their conferences on flag-based infractions. The Rockets give up 64.8 yards a game, while FIU suffers 75.8 yards of mental miscues.

Mario Cristobal won SBC Coach of the Year, which is plenty admirable since this is their first share of the conference championship and, resultantly, their first bowl game ever. Meanwhile, Tim Beckman has arguably done the best job in the MAC overall. He didn't have Miami's turnaround or NIU's win total, but he snap a streak of losing seasons, and — here's the key — did so without another large school noticing and then hiring him.

Both of these teams are playing their best football. FIU has won four of their last five; Toledo five of their last six. Naturally, Toledo is going to be the favored team. Slightly better record, slightly better numbers, slightly better competition, and slightly more Players Named Eric Page. Having said all that, conventional logic is no fun. Toledo should again contend for the MAC next year and should win another eight or nine games (maybe even at Ohio State!). But you ever get that feeling that a slightly more feel-good story just might have their day after some hapless losing seasons? Florida International 27, Toledo 24.