Miami Football Is Proof You Are Stupid

Share All sharing options for: Miami Football Is Proof You Are Stupid

David Tyree comes to mind. You probably remember Tyree's acrobatic catch in Super Bowl XLII. It didn't win the game, but it was the one we all remember in that upset of the perfect New England Patriots. To clasp that football between your hands and your concave plastic spheroid helmet is really hard to do when alone in a room, let alone in that situation. Tyree did not have a prolific career: just 54 career catches and four touchdowns. He is not on your fantasy team.

Neither is Chris Givens. The Miami junior receiver has been forgotten in this system, coming into the MAC Championship with 20 catches for 287 yards. He led the 2008 team in reception yards and missed most of last year with a major shoulder injury. But there he was, thanks to some talent ... but thanks to a lot of luck.

Facing a 4th and 20, Austin Boucher had to convert or Northern Illinois would've won. The story of the game would've been the cathartic special teams calls and execution: the missed extra point, the missed field goal, and the fake on 4th and goal. That equates to seven potential points that instead fizzled into the ether, and they would've lost 21-20.

But that is not what we're talking about. On that 4th and 20 play, for whatever reason, Northern defensive back Rashaan Melvin decided to come out from the free safety position and lunge toward the pass that was destined for Givens. The ball was deflected by linebacker Tyrone Clark over the lunging Melvin, and right into Givens' lap. They still had many yards to go, but the conclusion was clear.

You might remember the long touchdown to Armand Robinson who ran into the end zone because half the damn secondary went into blitz mode... well, maybe you will. Miami fans will remember it because it's a play where Miami won with execution, not random chance. But the casual observer and the heartbroken DeKalbian is going to look at the 4th and 20 play.

(UPDATE: here's the video, with bonus Rod Gilmore foreboding ... Okay, maybe Gilmore is the smart one.)

But look at the rest of the game. The macrocosmic story is actually Miami's defense. NIU only scored 21 points, which was their second-worst offensive output of the year (they scored 10 without Chandler Harnish against Iowa State to start the year). The 279 yards on the ground per game was limited to 92. Chad Spann averaged over 100 yards. He had 54. Harnish had just three yards on eight carries. He did pass the ball reasonably well (all three touchdowns were via airmail) but this forced the Huskies into a drop-back game, which is not the way they're used to suffocating the competition.

One more thought on Northern Illinois before we move onto the victors: 10-3 is still a hell of a season. They finally sniffed the Top 25, which speaks for their commendable regular season. They beat Toledo when usually the narrative ended up with Toledo beating NIU. And they're going to have a fun bowl game somewhere.

Okay. Now onto Miami. But first, we have to figure out which Miami we're discussing here: 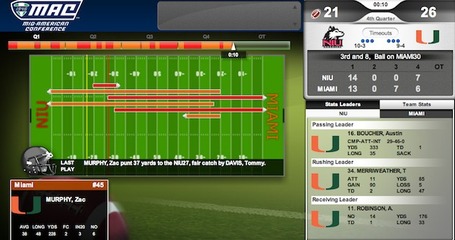 For Miami OF OHIO, here's why this win was so spectacular: because they were supposed to lose so abominably. They were playing a vastly better team on all facets. I really did believe — and feared, for the attention span of my brethren — that Northern Illinois was going to post 30 before halftime, but the act of shell-shocking went the other way. I'd have taken NIU -17 if I had gold coins to spare. I'd have probably taken NIU -27. I still can't explain it. (Also inexplicable: why ESPN booth analyst Rod Gilmore thought injured sophomore quarterback Zac Dysert was a four-year starter.) Boucher won this game for them, and this is the same young man who almost spiked the ball on fourth down. Freshman mistakes almost cost them the game, but the long Thomas Merriweather run to start their offense set the tone.

This is a team that, before the season, I expected to finish 3-9, and one of those victories was going to be over OHIO. In fact, that turned out to be their only loss in their MAC slate. Guys, I don't know what I'm talking about beforehand, and I hope you take that to heart. I can only tell you what I saw in the recent past. As evidenced by this e-mail, sent to me minutes after the victory: 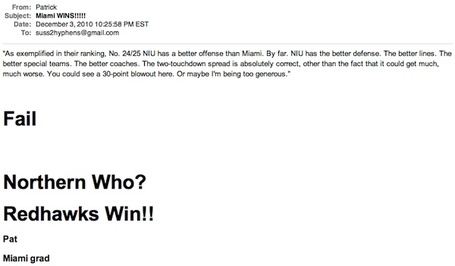 Contrarily, I'm glad conventional logic, which I adopted as my firstborn, was the incorrect theorem. Sports are fun when you're wrong. It still feels like a lucky victory, because so many sure things blew up in coach Mike Haywood's face during the game. And maybe it was. But whether fortune or fortutide was the driving force, that MAC Championship trophy will soon be locked in a displayable case in Oxford, Ohio.

Amazing stuff, RedHawks. This will make BG's win over them next year even more impressive.