Saturday's MAC Games: The Quest For The Holy Nonconference Win

Share All sharing options for: Saturday's MAC Games: The Quest For The Holy Nonconference Win

For once, there are no weeknight games. This is a strange feeling. In fact, we won't have the onslaught of Tuesday-Wednesday-Thursday-Friday games until November. This means you have no excuse to avoid your family for a whole month. They typically frown on "I'd love to make the dinner party, but I have to preview the Miami game." And then you have to explain which Miami it is, and then it just becomes more of a hassle than it's worth.

So they're all on Saturday. Try to keep your head on a swivel as someone in this conference sould finally, FINALLY get that elusive win against a team not from the Championship Subdivision. There are a lot of good candidates. Upsetting Ohio State is not one of them.

It's been not so much "okay, THIS will be the Big Ten win we've been looking for," mostly because the focus has been on Jerry Kill's dehydration hospitalization. It wouldn't be surprising if he took the week off, nor would it be unwise. The plan is for defensive coordinator Terry Claeys to coach if Kill can't make it. But that's irrespective of the chance that the Huskies have of socking it to the Big Ten. They scheduled games against Minnesota, Illinois, and Iowa State for a reason. Chandler Harnish and Chad Spann has to be the toughest dual-threat the Illini Who Fight have seen in this young season. And forget those two sub-tacular performances by NIU. Illinois is a soft Big Ten team, and it's very winnable. Guess: NIU 23, Illinois 17

Give me any other week. ANY other week. And the Golden Flashes would be a super-hip choice here. But not when Penn State walked back from Alabama (literally walked!) licking their wounds after a 24-3 drubbing. They ain't gonna let some MAC contender walk around the place like Doug Martin is the next Paterno. The problem is, Kent State isn't the kind of team to get blown out that easily. Even though native son Lou Holtz is predicting an upset. Well, I didn't go there. Hence, the guess: Penn State 37, Kent State 20. (This is also the same prediction, for consistency's sake, that I gave Penn State blog NittanyWhiteOut in my Q&A with them.)

The sentiment out of the Owls fan camp is "revenge (again)." In 2007 a goofy WR reverse toss into the end zone was ruled out of bounds, and replay wasn't ballsy enough to overturn what looked like the game-winning touchdown:

The battle for The Ohio Copyright, in football form. Many are mentioning OHIO's last game with tOSU in 2008 when they had a no-foolin' lead in the fourth quarter. But if that led held, you'd have remembered the game. We're going on 89 seasons without the Buckeyes losing to an in-state team (hold your heads high, Oberlin College) and as much as you believe in Frank Solich's teams playing a full 60 minutes or the occasional brilliant catch by LaVon Brazill ... you also realize that Ohio State's a really, really good team, right? Guess: Ohio State 35, OHIO 14, but OHIO UNIVERSITY keeps the trademark.

I believe we can bill this as the "Ball State of the Big Ten" and the "Purdue of the MAC." Although I suspect that won't get you to watch it. But did you know that both the Cardinals and Boilermakers' longest pass play this year has gone 25 yards? It's true! Guess: Purdue 28, Ball State 18

One of the questions this week in the MAC roundtable was about where the first MAC nonconference Bowl Subdivision win will happen. The Rams are still touchdownless this year (three field goals!) and have the rushing attack of banana slugs (2.3 ypc). Almost by default you have to think this is the FBS win we've all been looking for. Although I guess chronologically NIU's win over Illinois would be first. Guess: Miami 17, Colorado State 7

And the quest for The Aluminum Compass begins. 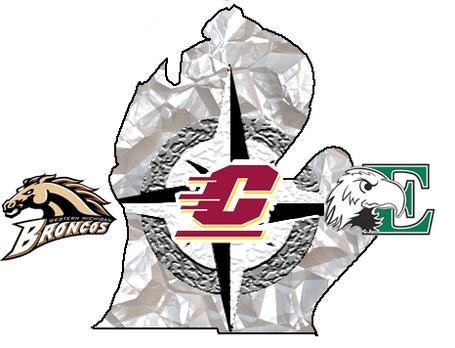 It starts with a curious little game in Ypsilanti, and just about everybody and their grandmothers are probably looking at EMU and saying "why?" But I, of strong faith and a hater of losing streaks, look at EMU and say "why not?" You gotta love their rushing attack, which is better than most, and their penchant to play in close games. And if you saw the Chips last Thursday night, you realize that they've got some special teams issues to work out. Guess: EMU 27, CMU 20, but Central's streak of half-ending-plays-fumbling-the-ball ends here.

So I'm confused. Did UT suddenly turn into a low-scoring, defense-oriented team overnight? The OHIO win was rather bewildering. If they keep scores in the 20s and still win, then everything I never knew about the Pinkel-Amstutz era is dead to me. I guess this is the true test, because the Broncos can toss the ball at will when they want to. But for old times sake, I'd like to see points out of both sides. Guess: WMU 45, Toledo 40

And with this home game, BG is the last MAC team to play their first game in their own backyard. But it's no gimme. You all saw Marshall last week push West Virginia to the edge of the hill ... only to fall to the Mountaineers in overtime. (Unless, of course, you actually took advantage of your social life Friday night.) But with losses to OSU and WV, their 0-2 is better than most's, especially Troy and Tulsa. So Marshall seems like the smart selection here. But I'd like to show my face in Alumni Hall. Guess: BGSU 27, Marshall 23

Which brings us to our second "used to be a MAC game" showdown of the evening. UCF's rise to mediocrity still puzzles me. One year they're 0-11 in the MAC, and the next they just won the daggone C-USA East division. But it worked out for them, proving once and for all that there's no place for a Floridian team in the Midwest. Our maps just won't have it. Since then, UCF has only played one MAC team — a win last year against Buffalo, in which the Bulls had a 17-7 lead, only to allow a barrage of field goals (thanks to four second-half turnovers) en route to a 23-17 loss. Lucky ducks. The fortune will strike again, because UB was exposed in Baylor to the point that Jerry Davis's completion percentage was a very good batting average (.391). Guess: UCF 23, Buffalo 14

Football's such a pedestrian game. How about soccer? The top-ranked Akron men's soccer has two games against Cal State-Northridge and Cincinnati as they host their own little tournament at home. No reason not to think they'll sweep the weekend and improve to 5-0. Isn't soccer neat? Guess: Kentucky 38, Akron 10