MAC Blogger Roundtable: Realignment, Lookin' Back, And The Power Struggle

Before we move on, let's fix that broken shield. 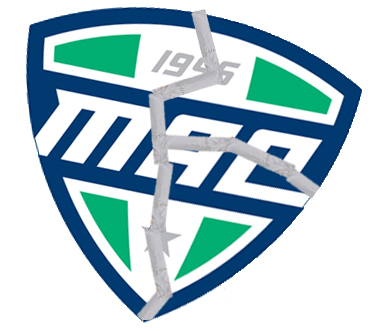 There. I don't think anybody's going to notice.

We now jump midseason into a thing some plucky Mid-American Conference bloggers have been doing for some time — a "roundtable" discussion, led each week by a different guy. He writes up some open-ended questions, and everyone else answers them. This week the moderator is Tim Riordan of the newly-SBN-assimilated Bull Run.

1) Throughout the summer the MAC has been mostly left out of expansion/raiding conversations EMU athletic director Derrick Gragg seemed to hint that there are serious thoughts about adding more team(s). Dust off you DeLorean and tell us what the MAC looks like in 2014. Who stays, who goes and who's new? What would you're realistically ideal MAC look like.

Temple as a football-only school is a very movable object. You and a buddy could probably move it yourselves without paying exorbitant fees for a moving company. They could leave the MAC if athletic director Bill Bradshaw can convince coach Al Golden to stay on the grounds that they return to an AQ conference, such as the Big East or maybe the ACC. Oh, but the Big East kicked their keysters out for not being competitive? Think they hold a grudge? When money is involved, the vapors quickly vaporize.

That brings us back down to 12, which is an OCD's favorite football conference number. That's five divisional conference games, and three against the other side.

But do other teams leave? Which ones would be attractive to Conference USA? Miami continues to be the team best situated to be plucked, but they're practically a founding member and seem far too loyal. There are some neat ideas out there involving FtCS teams or the service academies, but they're too inventive to be practical. So nobody else leaves. Nobody's added.

2) Most teams out of conference schedules are now winding down. Who has had the most disappointing and the most surprisingly impressive set out OOC games?

Well, propers to Bowling Green, Miami, EMU, and Toledo for scheduling zero FCS opponents. But in terms of who played them well … oh, gak, can I choose the Null Set? (Not CMU's mascot.)

3) Which MAC Coach, new or not, should sit upon the hottest seat in the conference?

It's still Doug Martin at Kent State. I'm going to be watching this team like Crispin Glover sitting in the tree in Back to the Future. October 16 at Toledo is their hardest game left on the schedule. But Jumpin' Jack Flash, look at their schedule: Temple and OHIO at home. No CMU. No NIU. These boys can finish the season with eight more wins — maybe nine. But if they finish the conference at .500 or worse, I have to think he's out. That would be a disappointing whimper of a finish.

4) I am asking out of order for a reason: Rank them first to worst.

5) Of the bottom five teams which one(s) do you think have the best chance of making some noise in conference this season? And of the top 4 who is most likely to fall apart?

Oh, you trickster! Can I switch Buffalo and Miami and make Miami the surprise team?

First with the good team that could go bad: I have DEFCON 3 concerns about Temple's offense. It thrives and survives on the legs of Bernard Pierce, and if he has to miss any substantial time, the defense will keep them in most games but a strict meal of field goals have never won a conference title.

Now for the icky team who could be trickly: Look at BGSU last year. They began 1-4 including dropping their MAC home opener to OHIO, then finished the regular season on a 6-1 tear. Three of those losses were winnable, winnable, and impossible. Much like this year! The home win at Marshall was such a grand evening. The other three, though ... well, Troy and Tulsa are probably games a good MAC team should win. Then Michigan. They could sniff a facsimile of last year's success, provided the offense starts getting comfy as the season ripens.

However, look at those four road games: OHIO, Temple, CMU, Toledo. Gak. That's a quagmire of a schedule.

Y'know what? I'm just going to say Miami surprises everybody. I don't care if they're out of my bottom five. I'll change my previous answer.