Well, hey, this is a neat way to start the conference slate. Last year's champion and this year's prohibitive favorite. It's a matchup that would've been better last year, but since they didn't play in '09, we'll settle for tonight and like it. So what we might be seeing here is Game 1 of 2 for the MAC Championship, with the only the second game counting for that title.

Admittedly it's a little awkward of a night for this game to take place, since the NFL posse will be out in droves watching their own debut — a brand of game that's not quite ready for Dan LeFevour's brand of football. That's cool. More room for us. And more salsa.

The numbers: throw them out. Seriously, they're against Championship Subdivision teams. What the heck are ya doin' parsing that jive? We still don't know anything of substance. Except:

• The two best defensive players in the conference might be in this game. Nick Bellore will wear maroon, and Adrian Robinson will wear cherry. Don't call it dark red to either of their faces, or you will be sacked for a moderate loss of yards and shall suffer concussion-like symptoms all day Friday.

• Quarterback play? Why yes, quarterbacks will play. But that hardly seems like where the playmakers are. Ryan Radcliff is not LeFevour, and Chester Stewart is competent enough. In fact, they both are. But the passing game is not where this game will be decided.

• Look behind the quarterbacks. With loads of carries for a phalanx of light infantry, it'll be a slow-tempo game, but methodical is the mantra of Temple coach Al Golden and CMU head football guy Dan Enos. Temple's got Bernard Pierce and "Downtown" Matt Brown, although nobody calls him that. The Chippewas will run at them with Paris Cotton and Carl Volny, with Radcliff sneaking it through the tackles when necessary. (Because the QB draw play is already in the playbook from seasons past, and dammit it works, so why change a good thing?)

And it's so easy to say that, well, CMU lost a lot of key players, and Temple got better, so Temple will win. However, allow me to show you this logic map: 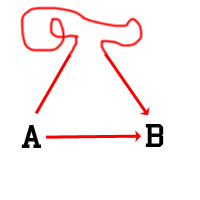 What you just did was use a direct line from A to B, which is the shortest distance. And there are very more efficient ways of determining who's better, which is to write a one-sentence preview. But see the longer path, which includes a loop and some impressive meandering? That's the extended game preview. And CMU is, at this point, at a slight disadvantage because of who they played, and who Temple played in Week 1. I'm glad this was able to sort out the error in logic you almost used there.

Guess: Temple 23, CMU 21. Maybe McManus continues to wow Philly with his angelic foot and drills another game-winning field goal as time expired. In that case, you might stop watching the lopsided NFL game and take a gander.

We'll have an open thread/live chat tonight, so please return and be social. Mother said you should make more friends.