Share All sharing options for: Super Bowl XLV Is Hustle Bowl I: 15 Former MAC Players Are Headed To Dallas

Unsure if this is a record, but with the Green Bay Packers and Pittsburgh Steelers in Super Bowl XLV, this is exactly the matchup any Mid-American Conference fan should have desired. With six on the Steelers and nine (!) on the Pack, that makes 15 of the 106 active roster football players former gridiron contestants in the MAC. They also represent seven current MAC schools and two ex-MAC institutions (when the players played for the MAC) To refresh your memory, the players are: 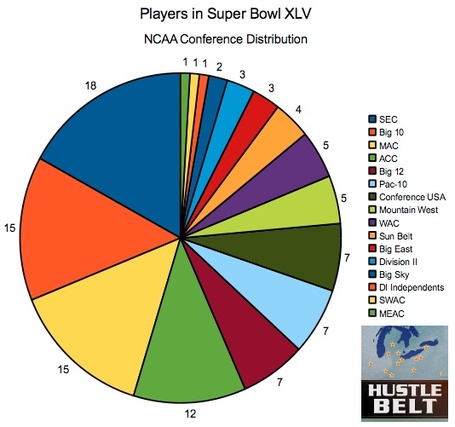 Note: I included Atari Bigby twice, once for the MAC and once for Conference USA, since he did play in with with UCF. There may be others that should've also been counted twice like this, such as schools who departed CUSA for the Big East or those who left from the BEC to the ACC. Or, hell, others.

The opening line for SBXLV is Packers -2½. You know why? That's because they have two-and-a-half more MAC players than the Steelers. Clearly, bookies are MAC lovers at heart.