Bowling Green Back Hands Out Turnovers, Field Goals For Halloween

Share All sharing options for: Bowling Green Back Hands Out Turnovers, Field Goals For Halloween

If it's not run defense that ails them, then it's the other thing: 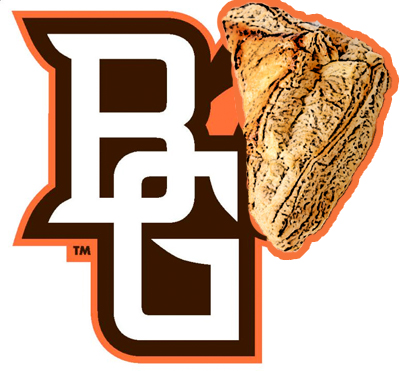 The problem with giving away turnovers on Halloween is that baked goods have a greater chance of getting crushed in a tote bag, especially if other kinds of hard chocolate are pushing up against it. They're also more expensive, and it just seems wrong. But nonetheless, BGSU gave away four turnovers to Kent State — and all they did was ask for them. And they used it to win 27-15.

One of them was a silly play where Matt Schilz was intercepted by Darius Polk, who then fumbled the ball back to BGSU on the same play. But there were much worse ones.

The fourth quarter began with a forced Kent State punt, who Eugene Cooper could not grab cleanly on the fair catch. It actually looked to bounce off his fingertips, caroming off his foot and landing right into the hands of KSU gunner Andre Parker at the BG 15-yard line. Kent State opened up a 17-6 lead three plays later.

Later in the fourth quarter Schilz had driven inside the 10-yard line, and on a third down pass play he threw it right into safety Luke Wollet's hands, who was barely in the end zone for a touchback.

And finally — this one almost doesn't count in their list because they had no chance anyways — with 15 seconds left on the board, and on the Kent 20, Schilz was sack-fumbled by Zack Hitchens, while Roosevelt Nix picked up the remains to finalize the score.

Death By A Million Field Goals

But it wasn't all that, either — they were relegated to using Stephen Stein to kick two short field goals off KSU turnovers. Stein also gaffed kicks of 38 and 41 yards.

With the score 20-12, BGSU had a prime opportunity to tie the game. On first and goal, Kamar Jorden dropped an easy touchdown. On second down, Schilz looked frazzled from the previous end zone interception, so he held onto the ball way too long and never pulled the trigger, eventually throwing it away. On third down Josh Pleasant may have knocked it away from Jorden, but he still should've made a better aggressive move toward the ball. Coach Dave Clawson's decision was to kick the field goal, which ... sure, it wasn't the worst decision of the afternoon, because you can only manage so many blunders while between the headset.

Meanwhile, credit to Kent State for getting things done on offense. They only ran for 140 yards (3.9 ypc) but they did break some big plays and FINALLY gained more than 30 yards on a single play (they were the only team in FBS who hadn't yet). No individual had more than 70 yards from scrimmage and Spencer Keith was fairly accurate but only had 174 passing yards. The story, as we figured it'd be, was Kent State's defense: nine tackles for loss, four turnovers, and some luck.