Who ever thought we'd see the day when EMU fans would be sad for the end of football season?

That day is here, and a men's basketball home opener Friday night coupled with football's final home game Saturday provides an easy comparison between the two programs. While the football team finally seems to be on the upswing after 15 consecutive losing seasons, the men's basketball team is, if not at rock-bottom, probaly somewhere in the neighborhood.

Can I say that last year sucked? Last year sucked. There, I said it. What else can you say about a team that goes 6-22 in Division I play, ranked #281 by Pomeroy and #302 by Sagarin?

After six seasons at the helm, Charles Ramsey was fired in the spring. Rob Murphy, a former Syracuse assistant with ties to the MAC and to metro-Detroit, was hired as the new head coach. His assistant coaches are Mike Brown, Kevin Mondro, and Benny White, each of whom has extensive coaching experience and strong ties to southeastern Michigan. Syracuse alum Jake Presutti is the director of player development and assistant sports performance coach, and Victoria Sun, another Syracuse alum, is the director of basketball operations. 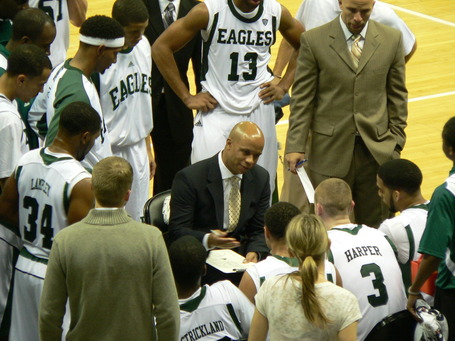 Murphy is saying all the right things, he's got the right resume, and he seems to have assembled a solid team, all of which give me hope for the future of EMU men's basketball. Unfortunately, this season, that probably won't be enough.

With seven departing athletes and six incoming, the roster is going to look quite different this year. 2010-11 seniors Brandon Bowdry and Jay Higgins were the biggest losses, but altogether, EMU is losing 46% of scoring, 42% of rebounding, and 40% of the assists from 2010-11.

Three newcomers are Division I transfers who'll have to sit out a year -- Glenn Bryant (Arkansas), Daylen Harrison (Wyoming), and DaShonte Riley (Syracuse) -- and of the three who are eligible -- Antoine Chandler, Austin Harper (Western Michigan by way of Glen Oaks CC), and Anthony Strickland (Adrian) -- Harper and perhaps Strickland will have a major impact this year, while Chandler needs to bulk up and will probably just be a body in practices this year. 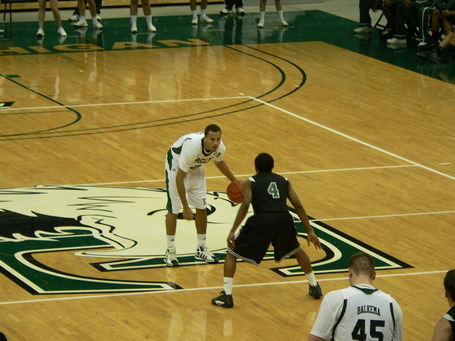 In the non-conference schedule, EMU will again play Michigan State. In Ypsilanti this time. You read that right. It's a shame the game couldn't be delayed until 2012-13, when EMU will have Bryant, Harrison, and Riley available. The Eagles were non-competitive with the Spartans in the 2010-11 season opener, and, short-handed as they are now, seem unlikely to do any better. Also, the Eagles will play at Syracuse, at Purdue, at Virginia Tech.

Very low. As long as they win more than the six Division I games they managed last year, and they look like they're putting forth a good effort and gelling as a team, I'll be satisfied. This season is expected to be a building season, while 2012-13 should see a much more competitive EMU team.