Getting Off On The Right Offutt

Share All sharing options for: Getting Off On The Right Offutt

The Ohio Bobcats men's basketball team started off the regular season strong this year with a 74-65 victory over Tennessee-Martin. Though the final score may indicate somewhat of a close game, Ohio had a 29-point early in the second half but a late charge from the Skyhawks would cut that deficit significantly.

You can blame extremely poor free throw shooting, some lackadaisical defense and iffy shot selection in the latter part of the second half for Tennessee Martin's surge. It was a bit discouraging after the Bobcats started off so strong but this is something you see all of the time. The home team gets complacent with such a good lead and lets the opposition back into the game. You never want to see it happen, but it does. Let's focus on the positives, because there were quite a few of them.

Offutt was the story of the game by far. The Ohio State transfer (For those of you counting at home, that's the second time I've mentioned that this year. I think I'll be at 128 mentions by season's end. It's the new Tyler Tettleton is Micky Tettleton's son.) had a whale of a game. On the first possession of the day for the Bobcats, Cooper found Offutt in the corner for a spot-up triple and he buried it, which was a sign of things to come.

He finished with 17 points on six-of-13 shooting, four rebounds, three assists and three steals. Based on how he played in the first 10 minutes or so, those numbers don't look all that great, but the intensity was lost in the second half and Offutt wasn't asked to score as often as coach Groce tried to get his other players some looks. That said, Offutt will be asked to score a lot as the season goes and it looks as if he will be the top scorer for the Bobcats this season. He showed that he has an outside shot in this game and had some impressive and aggressive takes to the cup as well. He can bring a little bit of everything to the table offensively and defensively, as he showed with three steals and some great man defense, he's a star as well.

To my surprise, we saw about eight to 10 minutes of action with Stevie Taylor and D.J. Cooper on the floor together. As soon as the duo hit the floor, Cooper found Taylor in the corner for the first three of his college career. Ohio was able to attack from both sides when D.J. Stevie (I'm open to a new nickname for the two point guard set) was on the floor. The only negative that came about was the shooting and that didn't really have anything to do with them being on the floor together. Cooper and Taylor simply had off nights from the field, combining to shoot just six-of-22 from the floor and three-of-12 from three. 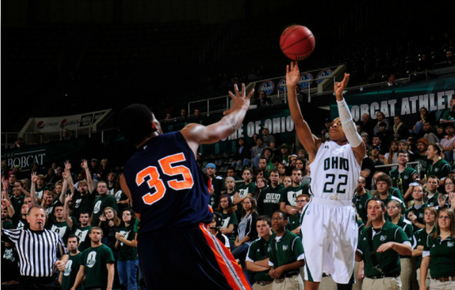 Other than that, both players pushed the ball well. Cooper had a ridiculous full court sprint at the end of the first half to put in a buzzer beating lay-up and Taylor was able to play fast AND under control which vital for a freshman point guard. Despite handling the ball for the majority of the game, Taylor and Cooper only had three turnovers. Cooper finished with a double-double with 12 points and 10 assists, a line I expect Cooper to put up more than a few times this season. Taylor pitched in six points and three steals.

My favorite part of this game was watching Ohio defend in the first half and early in the second. The Bobcats' guards were attacking the Skyhawks' posts when they exposed the ball and they were pushing up on the guards as well while Ohio's big men were quick with their rotations in the paint and guarded the screen and roll well. Coach Groce has said defense is the key this season and the Bobcats did a good job on that end of the floor for 30 minutes in this game. They held Tennessee-Martin to 15.4% shooting from three and forced them to commit 21 turnovers (that's a turnover on 34.8% of their possessions).

The four Ohio big men that played in this game combined for 14 personal fouls. This might of mattered had the game gone on and free throws were certainly a reason why the Skyhawks were able to get back into the game but the fouls did show activity by the big men, which is better than nothing, I guess.

It wasn't all bad for the posts, though. Jon Smith started ahead of Reggie Keely to make Keely the goto big man off the bench and the rotation worked. Smith had six points and four boards before fouling out and was active all game long. Ivo Baltic only had three shot attempts but he also got eight free throw attempts and ended up with six points and nine rebounds. Off the bench, Keely put together the most efficient offensive performance of the game - notching 16 points on seven-of-11 shooting. Keely had some nice moves inside but also flashed range on his jumper, something he's worked on during the off-season.

Finishing off the big man rotation was TyQuane Goard, who fouled out in relatively few minutes but was all over the floor with his length. His long arms were flailing all over the place and he made a few tips that went Ohio's way. He may be a raw offensive prospect but he's tall, athletic and long. Just call me Jay Bilas.

Another thing that was fowl was Ohio's foul shooting: the Bobcats made just 13 of their 26 free throw attempts. Yuck.

Nick Kellogg didn't have his shot today - he made just one of his four three's. This is not likely to continue.

I really like Ricardo Johnson as a back-up two guard or small forward. He's six-foot-four, athletic and can shoot the rock. He was two of three from the floor with five points and six rebounds, which is a really great line considering his minutes and shot opportunities.

T.J. Hall has the size to play a big role for the Bobcats but it hasn't been defined yet. I'm interested to see how he will turn out.