I'd love nothing more than for my preview to just consist of this rap video, embedded 100 times in succession:

Because that's going to be the theme of the season. Usually the question is: can they reach the NCAA tournament for the first time since 1968? At this point that's a condition of excellence that I'm not really looking to see from the team. To do that, BGSU must win the Mid-American Conference and they're not ready to do that yet. Not with Kent State, Akron, OHIO, and Western Michigan clogging up the top-tier.

To get there they'd need a week of pure adrenaline and luck, or Scott Thomas doing his best Armon Bassett impersonation. Not to say that it can't happen; but it's not what's going to define this season as a good one.

The story has quickly become the influx of funds being donated by loyal Bowling Green fans. Not mentioned in the video was Bill Frack's additional $10 million donation/inheritance to the BGSU basketball program. It might be state-of-the-art. It might have new paint and a great sound system. But is it going to be intimidating to opposing fans?

Here's a picture from when BGSU upset No. 5 Michigan State — a feat no doubt accomplished by the intimidating scenery: 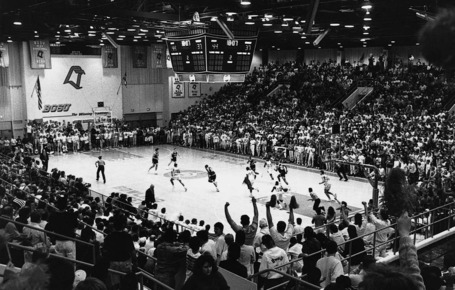 Here's what made this venue so hard to play in as an opponent: the students are right in your grill. There were no bars or separators between the students and the sideline. And those undergrads sat from corner to corner. For once, you hoped to inbound the ball on the baseline ... y'know, to give yourself some space.

For this and other reasons, it's why then-MSU coach Jud Heathcote famously declared "I think you've just seen the last time you'll ever see a Michigan State team in a MAC gymnasium." (Michigan State will play at Bowling Green next year.) When Kent State escaped with a victory at BG last year — their last time in Anderson — Geno Ford (who also went 1-4 there as an OHIO guard) said about the building: "I’m glad they are closing this thing. I’ll even volunteer to come back over here and drive the wrecking ball." They're not tearing it down, but you can imagine the glimmer in his eye when he thought they were. 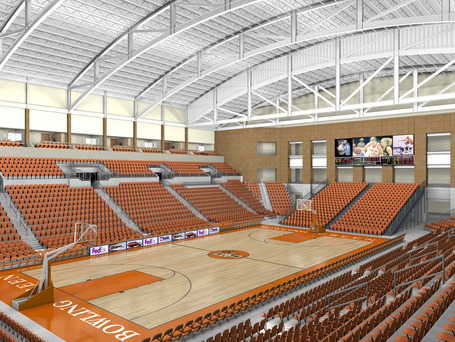 Well, there will be sideline chairs, but they won't be those of the crazed BGSU fans. They'll be mild-mannered people willing to spend some extra cash for the seats. The student section will be behind the hoop, as is commonplace now. Well ... now they can distract the free throws in lieu of a giant wall.

BGSU's first game is going to be against Howard, a weak team that actually beat them to start last year. It's not exactly busting out of the gates with something that can impress anybody, other than to gaze in awe at the sparkly white urinals.

On the surface, Bowling Green looks to be better because they didn't lose much. Joe Jakubowski was their best 3-point shooter but he saw diminished time his senior year mostly because others were playing better. Danny McElroy was a marginal scorer and sometimes-rebounder off the bench, but after the sophomore left the program he allegedly decided to rob someone's house. And Mike Dabney had some nice hustle minutes off the bench as a big man. Oh, and Wiley Roberts, the last person to score points for the men's basketball team in Anderson Arena (his only three points of his career) has graduated. That's basically 10 points and 5 boards a game.

Scott Thomas confuses me. He plays some pretty nice defense but his offensive numbers/efficiency went down in his junior season. But he is a rebounder/stealer at heart, and you need those. Likewise, Dee Brown can score pretty well, provided he's inside the arc. Then there's A'uston Calhoun, the Big Apostrophe, who mightily morphed into a force in the second half, but he didn't have enough help down the stretch.

What really plagued this team was the inability to sustain a run, aided by the 3-point shot. Brown is a career 37 percent 3-point shooter but he only nailed 1/3 of 'em last year. Nobody else on the team, save for Luke Kraus, was better than 30 percent on such attempts. As a result, if they fell behind, it was hard for them to build momentum.

And here's my concern with Jordon Crawford. He's wildly imaginative from the point, and a treat to watch, but at 5'6" I don't think he can play over 30 minutes a night. Not in this conference, with that frame. He's not Earl Boykins. He'll need help, and unless Clarke can make a difference right away, this offense might sputter late in the game.

That brings us to Cameron Black — he's not Javon McCrea but he is the player with the most promise from the post position. Can he stay out of foul trouble? Can he be a reliable scorer when they need a two? Is he even going to be in the starting lineup all year? Inquiring minds want to know.

Torian Oglesby is the dessert of the offense. I can't remember the last time this team had such a fun dunkmaster on the squad. He's also rather fond of the shot-block, but the concern on him is if he can become a more complete player.

I am wondering what Craig Sealey and James Erger are going to do this year. Maybe something, anything? Hopefully gain a bit of weight? This cannot be hard to do; you can't throw a pebble in downtown BG without hitting a pizza joint. Perhaps there is an overabundance of stickly forwards in the program. Everybody wants to be the next Kevin Netter.

Put 'em all together ... and you have a team picked last in the MAC East.

I don't blame them the sentiment. They finished with a 14-19 (8-8) record and while most of the gang is returning, so is pretty much all of the MAC East. It's also identifiable by the preseason All-MAC East team. One each from Kent State (Justin Greene), Akron (Zeke Marshall), Miami (Julian Mavunga), Buffalo (McCrea), and OHIO (D.J. Cooper).

Who is the best player on this team? Calhoun has the strength and hustle. Thomas has the defense. Brown has (presumably) the best jump shot. Crawford has the pace-setting and passing. Black has post-playing potential. But none of them appear to be tremendously dynamic, or game-changers like the five All-MAC East players. If you had to pick somebody, it'd be Calhoun. And if you made the MAC East into a basketball roster, Calhoun's the sixth man.

But the Falcons have set themselves up with a pretty favorable nonconference schedule. They break in Stroh with six of their first eight games there. Few of the road games (save for Michigan State and Georgia) look daunting. They can enter MAC play with 9-4 and some swagger. But 7-6 seems closer to reality. They're going to get beat up in their divisional games — I'll say they finish 4-6 in that category, then go 4-2 against the West. Yeah ... that's 8-8 again ... which put them in a tie for last place in the East and a 7-seed in the tournament.

There has to be some pressure on Orr to finally get over the hump. He's signed through the 13-14 season and it's be terribly rash to say they need to win this year. But if he keeps posting 8-8s in the conference, and the promising freshmen morph into little more than skilled role players, then it's probably going to be a Gregg Brandon-esque good-but-not-good-enough departure in the near future.

But hey, I'm excited to see that arena. Hopefully it roars.