He was instrumental to NIU's run to the MAC West division. With 0.5 sacks and four QB hurries in the MAC Championship Game, he also made an impact on their first conference title in 28 years. But less than two days after beating OHIO 23-20 in Ford Field, Sean Progar was pulled over for driving erratically and under the influence of booze-related products.

According to the Huskiewire report, Progar was charged with "driving under the influence, having an expired license and improper lane use." I'm going to be shocked if the team lets him lace up for the GoDaddy.com Bowl on January 7 against Arkansas State. If Jamaal Bass got three games for clarinetist assault, Progar should certainly miss this bowl game and do everything possible to get back in the good graces of Dave Doeren for his senior season in 2012.

The report also says he was driving at three in the morning down the 800 block of North Annie Glidden Road in DeKalb. I plugged that address into Google Maps to see if I could spot anything of note: 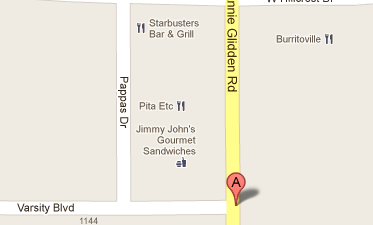 Well, that particular Jimmy John's is open until 3 a.m. on Saturdays, so until proven otherwise I'm going with that as our theory for why he was driving down that road. (It probably is something completely different, but who among us hasn't craved a sandwich at three in the morning?)

Of course, sandwiches have never been stood up as a viable defense to a DUI in court. If the charges stick and he does play in NIU's bowl game, I'll be a little disappointed in everyone involved.