Ball State Had A Serious Basketball Run To End All Runs

Share All sharing options for: Ball State Had A Serious Basketball Run To End All Runs

This may be all I need to write about this game: Central Michigan won the first half by 15. Ball State won the second by 22. Put it all together, and add in some more real numbers, and you have a Cardinals 65-58 victory, and I'm 0-for-2 on "Here We Go" preview picks. Nerts to that. But it looked real good in the beginning! At least admit that.

But let's pad this post one, shall we? CMU shot 50 percent in the first half to attain that 34-19 lead. The cozy McGuirk Arena was doing its thing for the home team, and many of the Cardinals were picking up two (and three!) fouls. Then the second half began, and the Chips brought the lead all the way up to 23 points. Again: 23 points. That means Ball State finished the game on a 46-16 run in a span of 17:02. Again: 46 points.

(Fun note: 46 points is more than they scored in an entire game this year against Division II Alaska-Anchorage, a game they lost.)

What's so astounding about this run is that it wasn't necessarily an offensive failure. In fact, CMU had just six turnovers all game. In that final 17:40, they only had one turnover. So this was a defensive meltdown. They shot 80 percent down the stretch: 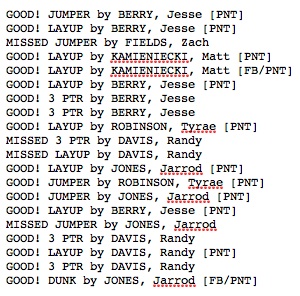 And two of those missed shots were blocked. The other was a Randy Davis three and a jumper by Zach Fields, which I don't think is something he's quite adept at.

We discuss a lot of offense when briefly going over games. Namely it's who scored what, and how efficient they were with points-per-shot. When you can't see the game, it's your number one exposed metric. But here's the profound lack of defense, coupled with red-hot Ball State shooting. It hits you in the face like a brick, which was the only brick-like thing going on for BSU.

So that's how it finishes. CMU drops to 6-8 and fails to gain ground on freefalling BG and Buffalo for that eighth seed, but they remain just one game back of them. They're very far behind Ball State, who's now at 9-5 and waiting to see if WMU can catch them. Forget about an outside crack at the West division, if you haven't already.