This is absolutely Byron Mulkey's day-slash-year and nobody's going to take that away from him. On a day in which ESPN.com runs a really awesome feature about how he redshirted last year as a senior, Mulkey poured in 29 points on Central Michigan to help Buffalo coast to a 72-43 victory.

The Bulls are 10-2 at home, with losses coming to Bowling Green in double-overtime and seventh-ranked Brigham Young by eight. In their 10 wins, they AVERAGE a 20.8-point victory over the opposition. This isn't all cupcake padding either; teams like Kent State and Green Bay were won by more than 20 points. Basically Alumni Arena is a very difficult place to win, especially this year.

It's also remarkably easy to find seats there: 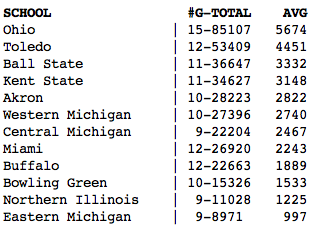 Woeful Toledo may not have 4,451 in attendance every night, but that's at least how many they sell per night. They are also a large metro area, much like Buffalo, which affords them to a larger fanbase. Less than two grand a night are watching this very talented team play. Holy hell.

Hey. It's their loss. UB is running through the MAC schedule at home and for now they're second in the MAC East at 7-3.

CMU, meanwhile, regresses to 3-7, but there was a positive sign that I've been yammering about for a while: Jalin Thomas is getting more shots than Trey Zeigler. Thomas was the only one who scored double-digits (18), and even though he was 4-for-16 from the field, he atoned at the free throw line by drilling 10-of-11. Meanwhile, Zeigler was a sporadic 3-for-13, but clanked many of his freebies (just 2-for-6) and hopefully the coach finally realizes that this year just isn't going very well for his son. (More on MAC freshman of the year discussion soon.)

But it wasn't just ALL bad shooting by the Chippewas. Although they only made 15 buckets, the UB defense showed up by swatting way nine of those shots, six alone by Mitchell Watt. Even Zach Filzen didn't have a great night shooting and they were able to win by 29. And Buffalo played smart, keeping their turnover number to a satisfactory nine. They'll go rather far when their TOs match their blocks. And if they redshirt more seniors.