Here's how it began. The teams were put into a centrifuge for two months, spun around, and were sorted by a complex calculs formula not understood by human ingenuity. In the end, Akron was the No. 6 seed and only won nine conference games. This didn't really matter in the slightest, because the teams 1 through 8 were so tightly compressed, it was a total crapshoot from the onset in Cleveland. In the end, Akron took down Kent State 66-65 in overtime at Quicken Loans Arena.

As teams continued to emerge from bracket-shaped clouds of dust, it was an all Northeast Ohio championship. Akron and Kent State. The ESPN2 announcers called them the Yankees and Red Sox of the state, and that's about right: you love 'em if you're from there, and everyone else feels equal parts enmity.

So even if you hate the participants, you can love the end product. But especially since MACsketball isn't shoved down your throat on every major network, it's entirely tolerable. Throw in overtime, and it was a perfect championship game.

It didn't have the prettiest free throw shooting (combined, both teams shot 50 percent) but the toughness and defensive fortitude was there. And we'll start off by lauding Zeke Marshall — and that's before I knew he was the Tournament MVP. Because ... dammit, nine blocks in a game! That breaks the MAC Tournament record by two, and nobody in the conference the last ten years has blocked nine shots in a game. He also had nine points and 13 rebounds (four offensive), so the guy was a free throw and a swat away from a 7-foot triple-double. It's amazing what he can do when he doesn't have to sit after two quick fouls.

In fact, the only one who hit foul trouble was Justin Greene, and that was in overtime. Going through regulation with only three, the MACPOY was slapped with two quick ones and bowed out quickly, forcing Justin Manns, the other Justin, to pick up the slack, and he missed a couple of necessary lay-ins.

Marshall nearly doubled his block total in the five-minute OT frame, swatting away four shots, including two in the final minute and one on the last possession. You can put Steve McNees on the block board with his high-elevating rejection of Randal Holt's last-gasp shot, leaving everybody in need of oxygen on that final play. It was the type of wild, erratic finish we saw in the MAC football championship, and we experienced it yet again.

Runners-up die hard in Cleveland, and UA knows this all too well. In last year's title game, they fell to OHIO in overtime as well. They also were one win away from the NCAAs in 2007 and 2008, so this win was necessary to shake off being the Atlanta Braves of MACsketball. 2-3 in five years ain't that bad. 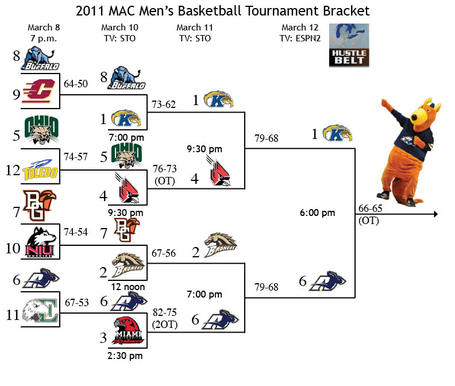 Earlier this week I wrote that Akron will likely be a 15-seed, since they haven't really beaten anybody impressive nor do they have bad losses. With a Pomeroy rating of 124 coming into the MACCG, that'll be a bit higher but maybe not worth a 14-seed. Looking at the current projected 15-seeds, Akron doesn't have anything better than St. Peter's, Wofford, Long Island, or Northern Colorado. The underlying MAC respect could push them to a 14, but don't bet on it.

Of course, this is looking down the road. For now ... it's a good night to be a Zip.