How Not To Collapse On The Court: A Michael Porrini Demonstration

Share All sharing options for: How Not To Collapse On The Court: A Michael Porrini Demonstration

I know that ESPN loves to handle Championship Week by cranking out games. One of them finishes, and they're onto the next one. But hopefully you were paying enough attention after Akron's 66-65 win over Kent State to see a prime example of what not to do after a loss.

Michael Porrini, I thought, was going to be the guy who would drain the winning shot for the Flashes. He's done it all year. But as you can see, he was triple-teamed on the final possession: 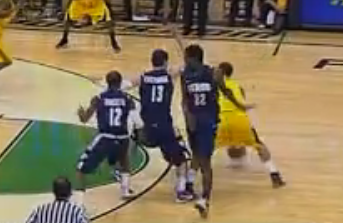 So he had to pass it off to the capable but untested Randal Holt, whose last-second shot was blocked by surfer dude Steve McNees. And then you saw this happening:

Naturally, this is what happens after a win. Now, you can spot Porrini right away by his booger gold jersey, hands on face, butt on ground, just mulling over how he was triple teamed and will be playing in the NIT.

These are sad thoughts, and ones that must be addressed immediately after such a loss. However, notice all the blue jerseys running amok on the court. They earned this moment. It's been a WHOLE TWO YEARS since they've been dancing, and a year before that they were the ones sulking when Kent State beat them in the 2007 MAC Tournament. Naturally they're going to celebrate around mid-court, near that big shield, where Porrini is a couple basketball-lengths away from. 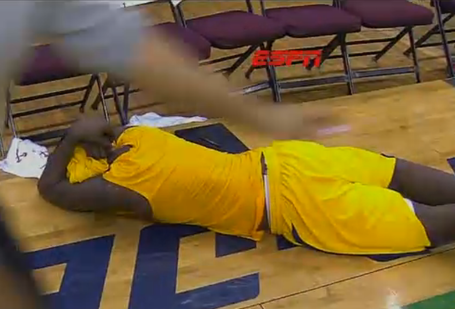 I can't tell who this guy is, but he's figured it out. If you want to collapse, do so on our own bench, because that's your territory, man. When you lose, it's all you have. Well, that and the locker room, but cameras can't see you there. Collapsing on your own bench affords you the opportunity to go prostrate, too. It's almost like he's been here before. Must be a senior. Rod Sherman, is that you? Show Porrini how to pout. Actually, you might want to check on him: 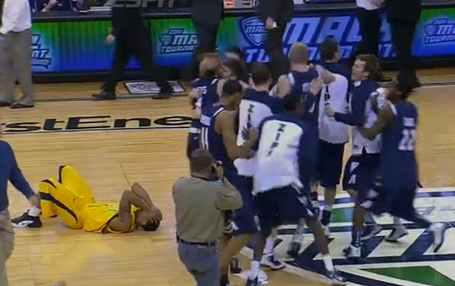 The main pile begins to congregate on the midcourt shield. They are joyous. They are not thinking about Kent State. They are probably thinking whatever joyous thoughts they can before they realize they're going to be a 15- or 16-seed and get mauled in the first round. But, dudes, they won the MAC! This was a year where the top eight teams were remarkably evenly-matched, so to be relegated to the first round wasn't a huge diss. One more carefully-placed win somewhere in January or February and they'd have received a first-round bye, perhaps. So this one felt great, especially since they began 3-5 in the conference, usually bringing up the rear in the MAC East.

Michael Porrini remains crestfallen. But those feelings will soon change. 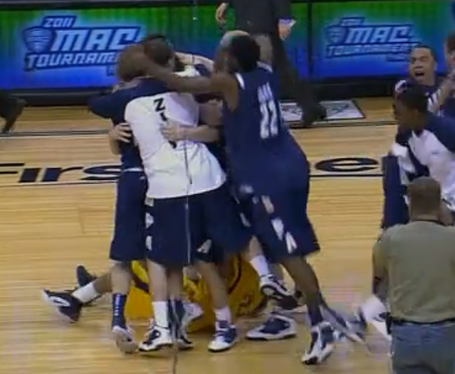 Like a cartoon dustball fight, Porrini has suddenly become part of it. Not only has his heart been trampled, but the term is also literal. This is also much worse than being triple-teamed during the game. There are many more than three people in this pile. As long as freshman point guard Alex Abreu doesn't lunge on top of everybody... 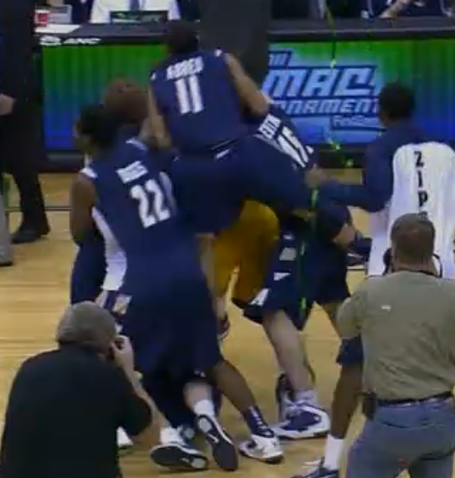 At this point, Michael Porrini's sadness has subsided, but the Zips have him well covered. His sullen teammates are nowhere to be found, so there's only two options:

Mr. Porrini chose Option 1, so he started a whole shoving fracas which ended up involving both teams and coaching staffs. No punches were thrown, but feelings were hurt and later the cleanup crew had to dispose of several gauntlets which were thrown down. Mark Henniger has also been declared either missing or at home kind of bummed out. We haven't confirmed either scenario.

Hopefully this blow-by-blow account will help future mid-major teams whose chances are dashed in the final seconds of a hotly contested game. There's a time and place to be sad, and that place is never at midcourt.