WNIT Second Round: Toledo Put The Screws On Auburn, 67-52

Share All sharing options for: WNIT Second Round: Toledo Put The Screws On Auburn, 67-52

They're making the most of their second chance, and thanks to that 23-8 regular season record, they're doing it in a friendly place. Toledo had absolutely no trouble with Auburn in the second round and they continue to work their way through the brambles of this ballooned WNIT bracket.

You want some proof? Here's the game flow: 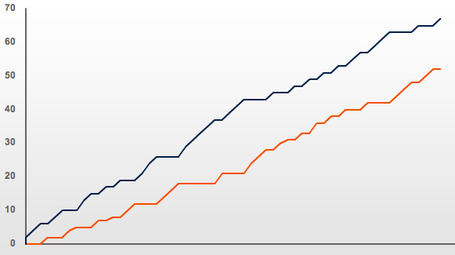 That's what you call total domination from the tipoff. And judging from the numbers, it wasn't even UT's best game offensively. They had several turnovers and didn't rock it from the 3-point range. But they really did seem to cause AU fits on the defensive side. Yolanda Richardson was the queen of the court. She had 20 points, eight rebounds, and two blocks, while and nobody on either team could match any of these singular stats.

This puts Toledo in the Semisweet 16 and will face the winner of Northwestern-Alabama. I'm guessing UT would travel to Northwestern but would host Alabama. So ... Roll Tide?