CIT Second Round: Buffalo Falls Into 49-48 Win At WMU

Share All sharing options for: CIT Second Round: Buffalo Falls Into 49-48 Win At WMU

The failed video player hosting the CIT games should've been the first sign. This was going to be a series of comedic errors leading to a game that someone has to win, because it cannot end in a double-elimination tie. Although I'm sure since this is the CIT, there is some way to seed both teams into the octofinals or whatever the flip they want to call it.

Instead, regulation basketball rules apply, and with neither team getting to 50, Buffalo advances with their lowest output of the year. They shot a substandard 33% from the field, which includes 2-for-13 from the 3-point line, but the abysmal stat was at the free throw line: 7-for-23, just above 30 percent. And they won a basketball game by doing this. Please don't think too much about it.

Both teams averaged under 1.00 points per shot (Buffalo: 0.94, WMU: 0.98) and with 33 combined turnovers to 40 combined field goals, it's no wonder why neither team could pull away.

Now, look at the game flow, but don't stare, because it's bad for the eyes: 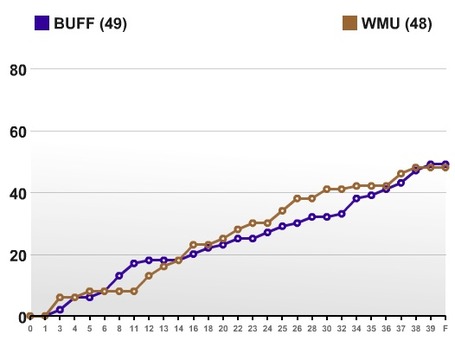 What you see in there was an early 10-point Buffalo lead, followed by a 9-point Western Michigan lead. While I can understand UB sputtering on the road ... honestly, isn't this what the Broncos are supposed to do at home? Put teams away early and maintain the lead? That's not what happened, and as a result the MAC West champion's season is kaput.

Leading both teams are ... you know what? Nobody gets any mention of stats. Because looking at the box score, nobody really had anything worth mentioning. Buffalo had 49 points, Western Michigan had 48. That's about enough.

Buffalo will play Iona in the CIT quarterfinals. Iona, according to CBS during the Akron-Notre Dame game, lost in the MAC championship. According to facts, Iona won the MAAC regular season title. So this is a MAC-on-MAAC showdown.