While OHIO and Buffalo are marching through the CIT and Kent State is barnstorming from coast to coast in the NIT, a minor story is brewing on the fairer sex's side. Toledo has reached the Round of 16 in the Women's National Invitational Tournament. Joining them to this level is Eastern Michigan, who after a home victory against Michigan have advanced to the third round after taking down North Carolina-Wilmington in a furious come-from-behind victory. 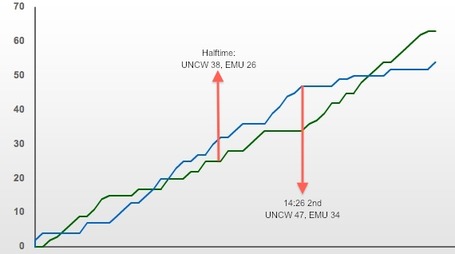 Wackiness. This means that EMU finished on a 29-7 run in the last 14:26. Doing that on the road isn't easy, especially against 2,667 fans. Leading the way for the Eagles was Cassie Shrock with 20 points and seven assists. EMU had 18 steals as a team; UNCW had a whopping 27 turnovers.

So now EMU must play at Syracuse in the third round of the NIT. This is looking three steps ahead, but should EMU and Toledo both win their next games (Toledo hosts Alabama tomorrow), they will meet again in the quarterfinals.