Bowling Green Jerseys Are Kinda Terrible, So Change Them Back

Share All sharing options for: Bowling Green Jerseys Are Kinda Terrible, So Change Them Back

It's hard to argue with Bowling Green having ugly football uniforms. While there's a vast anti-orange conspiracy in the media, the problem with BG's uniforms is not that they're orange and brown.

In a list on the enjoyable Lost Letterman website of the worst uniforms in the Football Bowl Subdivision, Kent State (#4) and Bowling Green (#1) made the "bottom 10." (And this time, it's not on football merit!) I find KSU's threads to be a little bland, but I don't consider them to be eyesores. As for the ordering of them, you can go all day and rearrange the rankings, but the point is that they're on the liste. So we'll just leave this to be about the Falcons' jerseys.

Orange and brown may be an acquired-taste color scheme, much like oysters; if people don't like 'em then there's no reason to convince them otherwise. If that's the case, then you can just stop reading. The rest of this is just going to infuriate you. 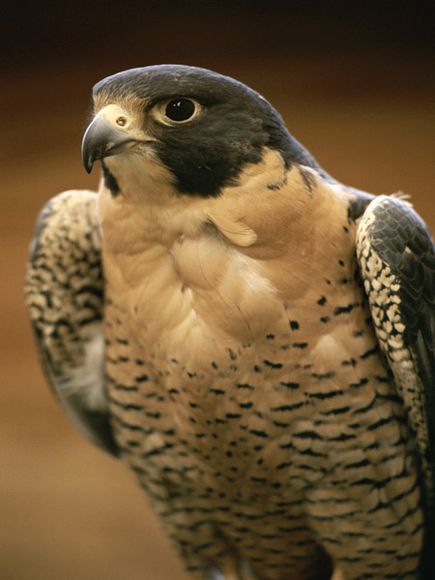 This is the peregrine falcon, the specific species modeled after the Bowling Green mascot. Orange body, brown accents. This is what they've tried to do when re-branding the uniforms, but the change didn't seem necessary. What we have now is an orange jersey with several needless white and brown stripes, coupled with an orange helmet with a "BG" interlocking logo. 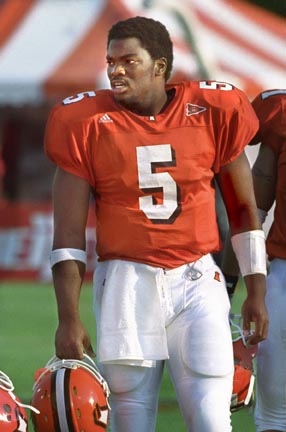 This is Bowling Green quarterback Josh Harris. From 2002-03, Harris defined not only the time I really started to love college football, but also these signature uniforms. Notice how orange that jersey is. Bold and classic. Brown accents are seen on the helmet, as the number drop shadow, and the outline of the old Falcons logo on the side of the helmet, which also needs to come out of retirement.

There's a reason people look to Ohio State, Michigan, Texas, Notre Dame, Penn State, Oklahoma, USC, Alabama, and the lot as classic uniforms. They rarely change. As the Falcons were moving out of a very bad period, their uniforms were synonymous with resurgent winning and the Urban Meyer administration.

One of the vital retention tactics with these great programs is tradition. Uniforms are but one small part of countless traditions across the country, but it does fit into the equation. When I remember the last few years, I think of mediocrity and brown/white jerseys. I know one does not cause the other, but one can't help but associate the correlation.

On the whole it seems like football uniform modification has gotten entirely out of hand. Bold colors with solid trim have given way to wacky stripe combinations, arbitrary stripes in all sorts of directions, and a convolution of identity.

Which brings us back to the logo. There's a reason my Twitter avatar is an homage to the older logo. It's a simple Falcon head that's versatile, unique, and monochromatic. The interlocking "BG" sort of looks like "PoG," and I don't know what that means. I'm all for giving graphic designers a chance in life, but rebranding of a sports logo, especially in college, might have the ability to alienate older fans. Or as cash-strapped universities like to call them, "alumni." We hate change. We accept that the teams purge their rosters every four years, but what keeps us coming back is the familiar.

Eastern Michigan fans were alienated when "Hurons" was retired, and while that was something larger such as a team nickname, all sorts of drastic changes can really hurt support. The BG uniform change has been more of a slow grind to something a little aesthetically uncomfortable. And this goes for any school who tries to fancy up their uniforms; keep it simple, and always go back to the old logo.