MACwood Squares: Who Is The Best NIU Football Player Ever?

Share All sharing options for: MACwood Squares: Who Is The Best NIU Football Player Ever?

MACwood Squares is our summer reading series on the best athletes in Mid-American Conference sports history. This week features Northern Illinois. Looking for your MAC school? Consult our schedule for other teams and please submit your nominees as well.

I have to hand it to the folk in DeKalb. They really know how to document their history and show the pride. More than any other school I've done so far, there's been some oustanding internal literature on the inception of the team through and including marvelous anecdotes about all the athletes. This is going to be a fun week. Mostly because of peanuts and chocolate.

Onto the non-definitive list of Huskie greats, and one football/inventor:

HB Reino Nori (1932-36) — A real sporthogger back during the Great Depression. He won 17 letters in five sports. Ferseriously. That's four each in football, baseball, basketball and track, and one in wrestling, which he got his freshman year and then quit, because holy hell, five sports. Many NIU fans and experts consider him to be the best athlete of their first half-century.

QB George Bork (1960-63) — Although some of his records may be surpassed by Chandler Harnish in the 2011 season, for now he still stands as the top passer in terms of yardage and touchdowns. His 1963 season was the really special one where he lead the Huskies to a small college national championship, going a perfect 10-0. A short CFL career later, Bork was inducted into the College Football Hall of Fame in 1999 and today still stands as the transitional catalyst between the historic era and modern era for Huskie football. But he also broke ground for football as a whole: His 3,077 yards in '63 was the first time any college QB threw for over three grand in a season. At any level. Jurgen Flurgen. Børk Børk Børk.

RB LeShon Johnson (1992-93) — Did you know that NIU's original school name was Mid-Major Running Back U.? They had to change it after Johnson made it pretty obvious that you're going to get some pretty sweet tailbacks out of DeKalb. As a consensus first-team All-American, Johnson torched the opposition for 1,976 yards (6.0 ypc) and 12 touchdowns. That single-season mark still stands today. Injuries and lymphoma all but crippled his NFL career (he did have a 200-yard rushing game with the Arizona Cardinals). But marring his entire image was being convicted of dogfighting, which is terrible to hear especially since he grew up with pit bulls.

WR Justin McCareins (1997-2000) — Not only does he hold most of the receiving records for NIU (204 receptions, 2991 yards, 29 TD), but his NFL career wasn't half bad either: eight total seasons with the Jets and Titans, totalling 17 touchdowns (one of them via a punt return). The MAC made him the special teams POY in 2000 and he currently holds the record for longest reception in NIU history (99 yards). Gonna be tough to top that.

RB Michael Turner (2000-03) — He was the most prolific rusher at the time of his graduation: 4,941 yards on 940 carries and 43 touchdowns. The Burner parlayed this into a fifth round pick in the 2004 NFL Draft and 7-year (so far) career with the Chargers and Falcons, getting two Pro Bowl invites.

DE Larry English (2005-08) — Before he was an NFL half-bust, English wrapped up, among several ball carriers, two Vern Smith awards and one MAC DPOY. His 31½ sacks is fourth all-time on the MAC leaderboard and a school best.

Honorable mention: OL John McNamara (1927-31) — He was a football captain as an offensive guard, but that's not what made him great. No, what put his footprint in both NIU football and Americana was his post-sports invention: peanut M&Ms. He's also credited with the advertising slogan "melts in your mouth, not in your hand." 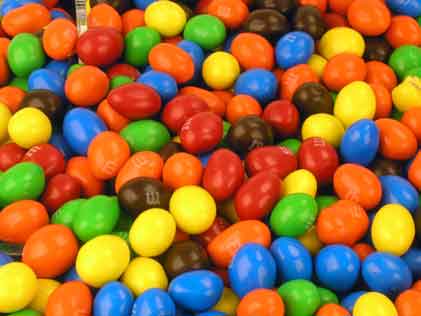 And not to be stern, but if they don't sell peanut M&Ms at the football games, then they deserve to never win another MAC championship.

And that's it for the list. Phew. Others to consider include Tim Tyrrell, Frank Lewandowski, Steve Azar, Dan Sheldon, Mark Kellar, Ryan Diem, Hollis Thomas, and perhaps even Chandler Harnish or Chad Spann. What say everybody?

Who are your nominees for Northern Illinois's MACwood Squares? Comment below, tweet us at @HustleBelt or submit a FanPost making your case. The final nine will be revealed Friday.