Whether it's football or basketball, MAC fans love to talk about attendance. In particular, we love to worry and whine about how bad our team's attendance is.

One of the most popular posts on my Eastern Michigan blog has been a chart showing football attendance for the last three years (2007-09). I thought I'd offer an updated version of that chart here, adding the reported 2010 attendance. 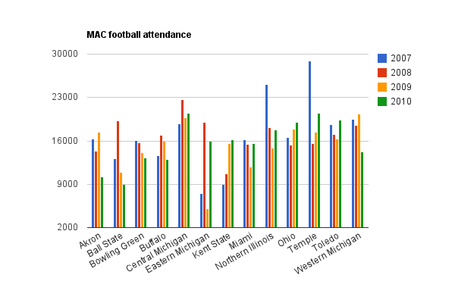 Teams obviously game these figures. The most striking example of this in 2009 was that Louisiana Tech had exactly 100,000 attendees for the season. I don’t know about you, but I’m willing to state confidently that the Louisiana Tech Bulldogs did not, in fact, have exactly 100,000 attendees in 2009. The key is that the school can report either actual attendance or tickets sold. So if the school can persuade fans to buy, say, 10 tickets at a time, or a corporation to buy tens of thousands of tickets, those all count, even if they don’t get used. EMU has admitted to doing this in the past, and their 2010 reported attendance, based on tickets sold, was more than double the actual butts-in-seats figure.