Now that summer is winding down, football season winds up. While NFLers were negotiating, college programs have been practicing and filing down their depth charts in preparation for Labor Day weekend when the season begins. The weather outside is heating up and that must mean it's time for us to begin previewing the MAC, one team at a time...

Located seven miles east of Ann Arbor and generally deep in the shadows of the University of Michigan, Eastern Michigan University has a long, but often ignored, tradition of athletic success in almost every sport except football. Actually, the school does have a tradition of football success too, you just have to dig through old records to find it...

Last season: It took a year-and-a-half, but Ron English finally got his first win as a head coach, in a come-from-behind overtime thriller at Ball State. They managed a second win at Buffalo, for a 2-10 record, which was a 2-game improvement over 2009.

Returning players: Two key defenders were approved for medical hardship waivers for 2010, allowing them to return for 2011. Nate Paopao was an outstanding linebacker at Palomar Junior College (CA) in 2007 and 2008 and played 10 games for EMU in 2009, but his 2010 season ended two games in due to injury. Latarrius Thomas was highly touted out of high school, and had a great freshman year at Louisville before being sidelined with injuries. He followed Ron English to EMU, and after sitting out the requisite season, he started the first two games at free safety before suffering another season-ending injury. This team needs all the help they can get on defense, and having two experienced athletes in the backfield can only help.

On offense, the Eagles return a bunch of familiar names, starting, of course, with junior quarterback Alex Gillett. It's hard to believe, but at this time last year EMU had a legitimate quarterback controversy, and we didn't learn until the last minute that Gillett would be starting ahead of Devontae Payne. Ron English has no such issue to contend with this summer; Gillett never relinquished the starting position, and Devontae Payne disappeared from the team just before the final game. With four returners (Buche, Sorgatz, Watman, and Neal) who totalled 39 starts last year, the offensive line should give Gillett plenty of time to distribute the ball, and three of the top four receivers (K. Thomas, Hoskins, and Scott) will also be back. At running back, Gillett and Dwayne Priest accounted for most of the production, and while Priest is gone, seniors Corey Welch and Dominique Sherrer and sophomore Javonti Greene should provide EMU with plenty of ground production.

New faces: For the first time in several years, the Eagles have no noteworthy changes (none at all that I'm aware of) on the coaching staff, which the players will probably appreciate. There also won't be many new faces on the offense, which showed improvement on and off last year, and figures to take a big step forward this year.

On the defense, people are expecting a lot from Marlon Pollard, a highly-touted recruit who landed offers from Nebraska, Notre Dame, Stanford, and Washington before choosing UCLA and then transferring to EMU. In addition to playing in the secondary, he may also take some punt returns. English has also brought in a whole bunch of junior college transfers to try to strengthen the linebacking corps, which is needed, because the run defense has been atrocious the last two years.

Games to circle: Three games on this schedule really get me excited: September 17 at Michigan, November 5 against Ball State, and November 12 against Buffalo.

As for the first, I know it's not going to happen -- even if the Wolverines have a let-down after hosting Notre Dame in Michigan Stadium's first night game ever -- but that's the game most EMU fans privately fantasize about someday winning. Buffalo is the only FBS team against which EMU has an active winning streak -- in fact, EMU is 4-0 all-time against the Bulls -- and by blogger fiat last year, this is now a rivalry game for the Ontario Sandwich Trophy! Ball State is EMU's chance to start another such streak, plus it's Ball State; there's just something about them...

Elsewhere on the schedule, it would be really nice to pay Central Michigan back for the painful losses they've inflicted on the Eagles the last two years.

The last game that I like is the last game, November 25 at Northern Illinois, and the key word there is "at". The Friday after Thanksgiving is not a particularly good day for a game to begin with, Rynearson Stadium gets mighty cold in late November, and last year's 71-3 debacle left me with a bad taste in my mouth. I'm glad to have an excuse to watch this one from my couch. 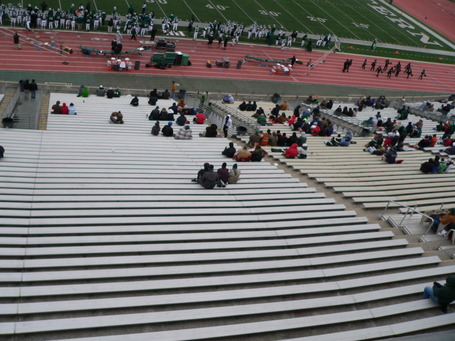 This was the crowd when Northern Illinois came to EMU in 2010.

Lloyd W. Olds, a 1916 graduate of Michigan State Normal College (now EMU), founder of EMU's intramural program, and EMU track coach for 22 years, came up with the concept of the striped referee's shirt. While an undergraduate in 1914, Olds refereed high school basketball games. He later said "The referee often looked very much like a player, so the lads often threw the ball to me or bounced it off my head. So I had a knitting concern make up a special shirt for me. The shirt had broad black and white stripes. I took plenty of ribbing when I first appeared in it, but the idea caught on among both basketball and football officials."

Also, you might have heard of our water tower?

Realistically I'm expecting 5-7, though 6-6 wouldn't surprise me. Either would be the winningest season in 16 years. Note that I used the word "winningest", not "best". EMU has never (?) scheduled two FCS/I-AA teams in a season before. Personally, I treat FCS games like vacated seasons -- wins don't count but losses do -- and since the other two non-conference games are at Michigan and at Penn State, the core of this prediction is 3 or 4 MAC wins. The schedule is also in the Eagles' favor, with their cross-division games coming against Akron, Buffalo, and Kent State, who totalled six MAC wins last year, while they avoid the stronger programs of Miami, OHIO (TM), and Temple. Against the West Division, games against Toledo and Northern Illinois -- probably unwinnable under the best of circumstances anyway -- are on the road; Ball State and Western Michigan, both of whom EMU played hard-fought road games against last year, come to Ypsilanti, and the change of venue might be enough to turn last year's OT win and fourth-quarter loss into two wins. The optimist says that 8-4 might be attainable, while the pessimist says that even with the easy schedule, the Eagles will ways to lose and finish 3-9.