Share All sharing options for: Mike Hart Roots For Eastern Michigan, Not Michigan

This is what we call going all-in for the MAC.

Mike Hart, of Michigan football running back fame, and once-Indianapolis Colts grit-performer, is now an assistant with EMU. You already knew this. You might not know his official title ("offensive quality control assistant") and you can certainly attribute EMU having the most rushing yards per attempt in the country to some of his mentorship. But you may always wonder if the Wolverines legend really has his heart in the right Washtenaw County quadrant. Especially with EMU and Michigan locking horns this weekend for country bragging rights.

Well, according to his words, he does.

The Detroit News did a profile story on him, being the curious personality wearing green and white, not maize and blue, in this in-state game. Ron English is also a former UM assistant, so it does feel like a buddy-buddy game, not to mention that the Wolverines are more than likely going to wipe the Big House's gutters with their feathers.

Hart reaffirmed his commitment to EMU and who he really cares about:

Of course this would certainly all change would he take another job, say with Michigan, in five or ten years. Then he'd be Go Blue all over again. Some might read "anymore" to meaning he'd never find himself in the position of wanting Michigan to win.

But there are EMU fans who are also Michigan fans. It's a mighty large overlap, really. I'll never understand it, unless they wear this shirt: 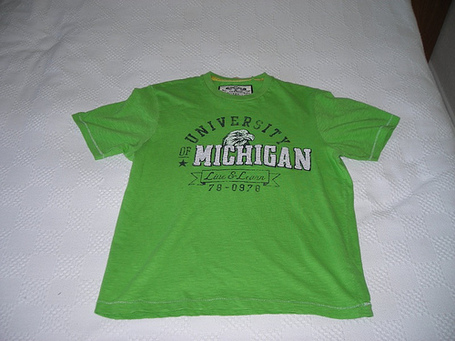 This is a t-shirt that I bought in Northern Ireland at a retail store. It's accidentally the perfect description of the EMU/Michigan symbiosis. No doubt it's incredibly hard for Eastern fans to feel like they can keep up with the eponymous state university in everything, sports or academics. A WNIT win over the Wolverines probably isn't enough to wipe away this mentality. And neither is Mike Hart going whole hog into the Eastern Michigan mentality. But it's a start.

I asked our resident EMU expert cmadler on the backchannel what he felt about this, and he brought up another good point: Hart has a history of saying some odd things when it comes to rivalries. He famously referred to Michigan State as U of M's "little sister brother," and that's all changed now that the Spartans have a winning streak on them. Years and a career later, he's ensconsed in Michigan's ... how do we put this, "red-headed stepchild." And that's terrific.

It's great to see EMU pride bleeding from every orifice. We want this team to do well because I'm pretty tired of people saying that they need to get rid of their football program. if English, Hart, and the rest of the crew are showing a commitment, and they still fail, then you can definitely question if the rest of EMU is fully behind this endeavor. I'd like to think they are. The fans aren't ... yet.

I could spend another 5,000 words on the menality of taking fan ownership in both a MAC and Big Ten school, but I'll bite my lip and fight that battle another day.