They do exist, but you'll be hard-pressed to find two schools who, for whatever reason, have identical school colors: green and white. Also both schools happened to be located in hilly regions. How do they know at whom to cuss?

Okay, when put next to each other they're noticeable, but from a distance it's just an amalgam of grass clippings, Sleestak skin and pool table felt. I've got this feeling that the colors are going to be all that tie them together. Right now the difference might be expectation location. I'm not sure if the Glass Bowl or Peden Stadium is a more difficult place to win in terms of the atmosphere: I might have to give it to our hillfolk brethren in Athens, simply because their topography is so much different than the rest of the conference mostly because it resembles West Virginia. So that's pretty much out the window thanks to Marshall. 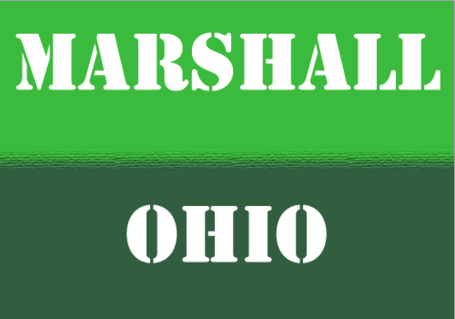 Marshall uses what's called "kelly green," which is actually something they brought back to their tradition after abandoning it near the Randy Moss days — probably no correlation — while OHIO sports a "hunter green" flavor. I'm sure somewhere there's a family which has a Kelly Green and a Hunter Green, but odds are they do not really care about this game. Perhaps Kelly Hunter, though. And who would Kelly Hunter root for? Is Kelly Hunter a he or she?

Hills and greenness. Sigh. Guess we'll have to use football to differentiate the two.

What we know about Marshall: they were picked to finish in the middle of the Conference USA, which is basically like saying they'd finish at least in the middle of the MAC. (It's their top echelon teams which rise above the MAC's top.) They took one on the nose against West Virginia before mercy thunder ended the 34-13 rout, but then rebounded and narrowly won against Southern Miss, and I do mean narrowly: USM brought the game to within six and recovered an onside kick to win the game but threw a game-ending interception on their third play.

A total of six takeaways was the main reason Marshall was able to hold on, and wouldn't you know, OHIO also had a turnover bug, giving it up four times against Gardner-Webb. By virtue of playing Gardner-Webb, they still held them to three points. So that's going to be vital to keep the ball in the hands of the men in green. Er ... hunter green. [blank stare] The darker one.

The good news for OHIO is that they'll be facing a freshman quarterback, Rakeem Cato, who will randomly appear out of nowhere and attack you. So since this is his first year we aren't too privy to his potential, but we know that his chinstrap beard has already been the toast of the campus and if you're going to do the neckbeard, come strong and grow out the mustache too.

If you want to know about the Marshall Defense, be aware that it's a chess move not quite popular amongst experts. So Tettleton would do well to just throw right over the pawns so that they can move the ball toward the king, hopefully dodging the rooks.

They might have a special teams weapon, apparently: Andre Booker was the gentleman who put MU ahead of West Virginia early with a punt return for touchdown. Usually these types of players also play a lot on offense or defense and he seems to be buried in the wide receiver depth chart as the second "OR" on the H-wideout.

We'll just let this one play out, and we hope that there's some excitement left in the rejuvenated rivalry.

But we care little for Marshall at this point in history. They left the MAC to try and and improve their national status, and what in the sam hill good does it do to go from one non-AQ conference to another? For a few years they abstained from any and all hustle-based participation, then they snuck in a two-game set with BG, then OHIO ... then OHIO again in a bowl game. They're also going to lock helmets with Miami four times this decade (and just announced Akron for '14 and '16). Dude, do you guys want to come back? Just admit it. It was more fun here. You had more fun here. There were MAC championships and Chad Pennington and Randy Moss and Darius Watts and remember when the offensive line had to carry Byron Leftwich down the field between plays? It can be that way again. Y'know ... if we'll have you. We're pretty set with the 14 we have.

Buffalo-Ball State and Kent State-Kansas State are both at 7 p.m. along with this one. It's a sound argument to make this one your primary watch by virtue of how close a game it might be, along with it being a rivalry. Keep your second and third eyes on the others, however, but try not to cross your eyes, because then all the green may look the same.