Bobcats Beat Down Marshall in Battle for the Bell

Share All sharing options for: Bobcats Beat Down Marshall in Battle for the Bell

Coming into this game the only history I knew about the "Battle for the Bell" was that the game was between the Ohio Bobcats and Marshall Thundering Herd and that Ohio hasn't won the match-up since 2000 (though they have only played six times in that span). One smaller detail that would have been good to know is that the bell itself is not presented in a formal manor after the game. Rather, the winning team just rushes to the trophy and starts ringing it wildly. This would have been good to know because with just about 30 seconds left in the game, I moseyed over to the table that trophy was on to get a look and a picture. Unfortunately for me, just moments after I got to the table, a herd of players (pun intended) rushed my way. Lets just say I didn't get out of the way in time.

Other than that, though, my first game as a student at Ohio University was a successful one. The Bobcats made it seem like Marshall didn't deserve to be on the field with them and were definitely more fired up about this one than Marshall, taking the game by a final score of 44-7. Youth had a lot to do with Marshall's inability to score - their starting QB, Rakeem Cato, is a true freshman - but their defense couldn't stop Ohio at all in the first half and the Bobcats didn't even have to punt until the second half after they had taken their foot off the gas pedal.

Marshall was clearly trying to run the ball to set-up the pass, a strategy used by many. Unfortunately for them, they couldn't throw the ball. Though Rakeem Cato was competent against West Verginia and Southern Miss (he had 330 yards on 63 attempts, three touchdowns and two interceptions coming into this game), he was just awful in the game. He threw a pick on the third play of the game (first drive), on Marshall's third drive of the game. on their fourth drive and their eighth drive of the game. All of those picks came in the first half and three of them were in the first quarter. Two even things out, Marshall also had two fumbles in the second quarter, giving the Thundering Herd six turnovers in the first half. And it's not as if he was stuck near his own endzone, either. Ohio had some issues on kickoffs as far as distance goes and Marshall was almost always able to get a substantial return off of the Bobcats' kickoffs.

Ohio's offense was led by Tyler Tettleton, who had a fantastic outing. Many billed this as Tettleton's first major test and it sure looked like he knew this was a key game. Tettleton was effective through the air and on the ground in this contest and he made it so he had little work to do at all in the second half. While his receivers certainly helped when it came to gathering yards after the catch, Tettleton finished with 285 yards on 20-of-29 passing and three touchdowns. Additionally, Tettleton rushed for 53 yards (nine carries) and a touchdown. Tettleton is such a heady QB and his high football IQ extends to the running side of things. Tettleton made good reads on option plays and was able to create something out of nothing by quickly recognizing coverage schemes. The time elapsed in between his dropback and him taking off up the seams was minimal and it allowed for him to get into the open field and get a lot of positive yardage. 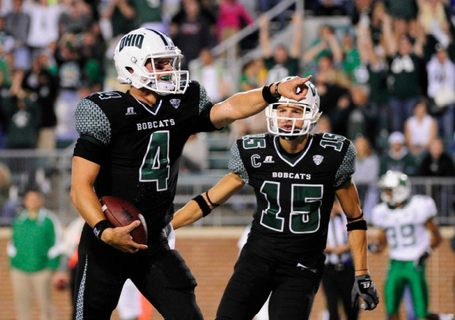 The Bobcats' have yet to settle on a consistent running back rotation and this game likely didn't help the decision making process. That said, it was for good reasons. Dante Harden contributed in all areas in the first half, bouncing off tackles easily (I unofficially tallied about eight broken tackles for Harden) and fighting for extra yards on every touch. Though his rushing totals of 42 yards on eight carries is nothing to write home about, Harden also had a 74 yard kickoff return and 45 receiving yards on three catches. Harden came out of the lockerroom in street clothes after half-time but a trainer told me it was just a precaution. Taking Harden's place after half-time was sophomore Ryan Boykin. After a pass heavy first half, Boykin was clearly inserted into the game to act as a minutes eater but he ended up making the most of his playing time. Boykin had just 14 carries and 67 yards in the first two games of the year but he rushed for 130 yards and a touchdown on 25 carries and showed that he could handle the workload as an every down back.

Ohio ended up with a very balanced score sheet, passing for 288 yards and rushing for 271. Even the Bobcats' passes were spread out, with 11 different players catching at least one ball. Phil Bates was the leading receiver with 71 yards and a touchdown on three catches but LaVon Brazzill was impressive as well, catching three passes for 32 yards and two scores (including a nifty catch in the back of the endzone in the first quarter). And though he was only credited with one catch for 11 yards, Donte Foster had the catch of the game and the best catch I've ever seen in person in the first quarter that got called back because of an illegal formation penalty (Here's a photo of the one-handed grab via Ohio University).

The Bobcats haven't yet had a true test thus far - I would say this game was more of a statement than a true test - but they are 3-0 and the chances of them reaching their ultimate goal of an undefeated season gets bigger by the week.

Here are some other notes:

Phil Bates is Ohio's X-Acto knife and his versatility played a big part in this game. Bates didn't run any plays as the QB but he was featured as a receiver, running back and return man. While I'm sure he'd like the attention being a starting QB brings it seems like he is fitting in perfectly into his current role. He looks like he has added weight to combat the additional hits he'll take up the field, the routes he ran looked crisp and clean, he had good hands and he even showed a bit of his breakaway speed on his 50 yard touchdown grab.

Tettleton Comfortable On The Move

One of the many things that impressed me about Tyler Tettleton tonight was his ability to roll out of the pocket and make throws on the run. If I had to guess I would say that he made the majority of his 29 passes outside of the pocket and his numbers weren't effective whatsoever. Even with such a stout offensive line, Tettleton's mobility helped him create better passing angles and kept the defense guessing as to what king of routes his receivers were going to run. The first pass that I thought Tettleton "missed" wasn't until the third quarter, which is a testament to his accuracy and his smarts.

One of the perks of being on the sideline for games is that you get to hear a little bit of the chatter between the players or coaches. Most of it is trashtalk but in a few cases you can actually see how players communicate with one another while also trying to hide it from the other team. On one play in the second half when Kyle Snyder had come in to relieve Tettleton, Bates was lined up wide right. Bates recognized that Marshall was single covering him with a DB that was well under six-foot and much smaller than him. Bates got Synder's attention and pointed at the DB. Most people would think Bates was asking Synder to throw him the ball because of the height advantage he had on his man but instead he was signalling for Snyder to switch to a QB keeper play going towards his side. Snyder made the audible and was able to get around the edge (thanks to Bates' block) for a 14 yard gain that put the Bobcats inside Marshall's five. Two players later, Boykin scored on a one-yard run.

I thought this an excellent example of Bates really "doing it all." Rather than just passing, catching and running, Bates is also playing the mental game and doesn't mind getting down to the basics and blocking. How many wide receivers do you think would ask for his QB to run his way so he'd get a chance to block?

As is usually the case when a team gets a huge victory, I've focused mainly on the offense, but Ohio's defense has been stellar this season. After giving up 24 points to New Mexico State in the season opener, the Bobcats have held their last two opponents to 10 combined points in eight quarters. Ohio forced six turnovers and four punts while also holding Marshall to a just about five yards per play. And had their offense not been so dominant, I'm sure they would have been able to prevent them from getting even that many yards per play. Junior Travis Carrie had two interceptions in this game while junior Omar Leftwich and sophomore Xavier Hughes each had one.