CMU v Kentucky: Q&A with A Sea of Blue

Share All sharing options for: CMU v Kentucky: Q&A with A Sea of Blue

CMU was the least impressive of all the MAC teams to earn a victory last week, stumbling on offense. But luckily for them, the defense stepped up and held their opponent to 137 yards of total offense. It also helps that the opponent last week was FCS South Carolina State. 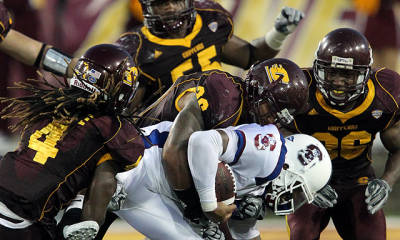 This week CMU gets a big step up in competition as they travel down to Commonwealth Stadium to take on the Kentucky Wildcats. Throughout the week I had a chance to exchange a few question with A Sea of Blue and the head of their blog, Glenn Logan.  You can find my answers to his questions in this article.

1. Who are the playmakers for Kentucky on either side of the ball that CMU will have to try and contain this Saturday?

Our offensive bell cow right now has to be Morgan Newton, the quarterback.  He is a big man with a strong arm that can run, and even though he didn't have good game at all against Western Kentucky, he is capable of doing a lot of damage if he gets his head screwed on right.  Running backs Raymond Sanders and Josh Clemons (a true freshman), have speed and skill, and can make plays. 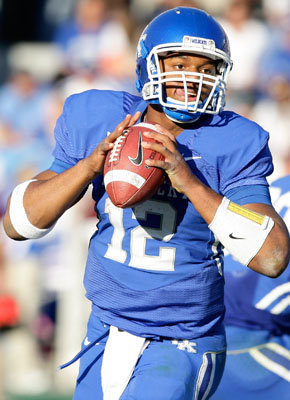 It is said that Demarco Robinson will see a lot of time against CMU, and this true freshman has really excited the coaches this summer.

On the defensive side of the ball, Danny Trevathan (all-SEC linebacker) and Winston Guy are the guys who will be making most of the tackles.  Collins Ukwu is a dangerous pass rusher from the DE position.

2. What are the goals/ambitions for the Wildcats coming into the year, and how does struggling against Western Kentucky affect/change those goals?

Winning that game by such a small margin is a setback to the perception of this team and their perception of themselves.  Western is much better than people think, but Kentucky should have beaten them by at least three touchdowns.  The reason they didn't is receivers dropping passes and Morgan Newton throwing the ball into coverage, as well as Western stacking the box and betting we couldn't pass.  They were right.

There is really no excuse for how Kentucky played against Western, and it is possible that Kentucky will have a hangover from that game.  Practice reports have been positive, though, so I wouldn't count on it.

3. What went wrong in last weeks 14-3 win to Western Kentucky?

Even though we were on the long end of that score, plenty went wrong.  The receivers treated the ball like it was hot metal.  The quarterback threw the football into traffic and got intercepted.  The offensive line did a very poor job protecting the quarterback.  The lack of a passing game allowed Western to stack the box and shut down the UK running game.  The playcalling from the bench was as predictable as the sunrise.  The Wildcats appeared not to properly respect their opponent.

I think that's about all.

4. What does Kentucky need to be successful at on Saturday in order to get a victory?

Kentucky needs to mix the pass and the run, and have success at both.  Kentucky wants to establish the run first, but if CMU stacks the box, Kentucky has to successfully make them pay with downfield passing.  The playcalling needs to improve, and perhaps we should trot out more plays to get Sanders on the edge instead of running him exclusively between the tackles, he is fast enough to really do damage that way.  I'd like to see a bubble screen or two.

Defensively, Kentucky just needs to keep doing what it did against Western -- stop the run, stop the pass, swarm on defense.

5. What is one area of Kentucky that CMU might be able to exploit on Saturday in order to be successful?

Stack the box against the run like Western did, and force Kentucky to throw downfield.  It worked for them, it might work for you.

6. With the exception of Jacksonville St. later in the year, this is Kentucky's last non-rivaly/non-conference game, is a game like this considered "must win"for a team like Kentucky?
All four non-conference games are must-wins for Kentucky, as 2-3 wins in the SEC is about typical for us.  Barring a surprise run to .500+ in the SEC, every non-conference win is critical for our post-season hopes.

7. Your prediction for Saturday?

I think Kentucky shakes out the cobwebs and puts on a strong performance, 31-10.
Once again, I would like to thank Glenn for answering these questions leading up to tomorrow's game. Kick-off is set for 12 noon and is available on ESPNU, and ESPN3.com