What a year! It was a wild one. We saw Eastern Michigan rise from their ashes (sort of), NIU end a 28 year drought, and 5 MAC teams make bowl games, going 4-1 in those games. We were here picking all of those games, and now that the roller coaster ride has finished, it's time to announce our winner (even though if you've been following us, you already know).

I want to thank everyone for playing along. This year we had a total of 24 people participate in the Pick'em in it's inaugural year. Not everyone saw it through, but with an average point total of just under 81 per person, we had a good participation for the early portion of the year. We'll break up the overall standings into 3 tiers: "Tried It Out", "Got Bored", "Champion Caliber". The names are pretty self-explanatory, so here is the first tier for you:

The common theme for these guys? Only mattsledge played 4 weeks. Everyone else was 3 and under.

To see who won the $50 Buffalo Wild Wings Gift Card grand prize, and see where the top 11 finished, follow us after the jump!

This next tier is aptly named "Got Bored" because, well, they got bored and stopped playing. Here it is:

We are now down to our final 6. These guy were the best of the best. They hung in there all year, and picked every game. We'll unveil our first half of the "Championship Caliber" table now:

A huge thanks for these guys for hanging in there, as I think they all had the lead at some point over the season. And now we have reached the finale. These guys were the best of the best. If I could, I'd reward everyone here with a prize. Unfortunately, I'm the sponsor of this shindig, so college expenses have me a little on the short side. Nevertheless, our MAC Pick'em medalists are......... 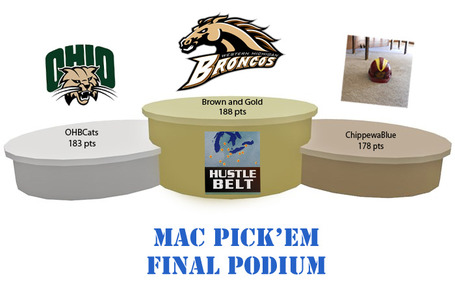 That means the winner of our grand prize is........me. Anti-climatic I know, but oh well. The final table, with point rankings is as followed:

The winner of the bowl pick'em was Brown and Gold via the tie-breaker with 20 points. The other two medalists also had 20 points, but weren't as close to the actual MAC points scored (173).

So that will conclude this year's MAC Pick'em. I'd like to thank everyone who played, and a special thanks to everyone who hung in there. Another thanks to Matt Sussman and Hustle Belt for letting me run this. I look forward to seeing you all next year, hopefully with an actual sponsor.