Since EMU is having yet another utterly craptastic fall of football, Eagles fans have been eagerly awaiting basketball season for a good many weeks now, and at last! it's almost here.

In Rob Murphy's first season as a collegiate head coach, the Eagles faced a tough non-conference schedule that finished with an eight-game road trip, including games at Syracuse, Purdue, and Virginia Tech. The Eagles carried a 4-9 Division I record into the new year, but 2012 brought more-frequent home games, less challenging opponents, and an NCAA waiver allowing Syracuse transfer Da'Shonte Riley to play. Powered by a brutal defense and a slow-it-down offense, the Eagles clawed their way to a 9-7 MAC record, good enough to win the West Division.

Unfortunately, under the new MAC tournament format, all that matters is overall conference finish, and instead of the #2 seed EMU would have had under the old format, they found themselves with the #5 seed, hosting a first-round game, which they lost to Northern Illinois.

The Eagles graduated four seniors from last year's team: Darrell Lampley, Antonio Green, Kamil Janton, and Quintin Dailey. Lampley and Green combined for 20.5 points per game, which, when you remember that EMU averaged just 53 points per game, was nearly 40% of the team's scoring.

After leading the team to a MAC West Division title and being named MAC Coach of the Year, Rob Murphy was rumored to be interested in the open head men's basketball coach position at Virginia Tech, and was later widely reported to have accepted a scouting position with the Orlando Magic before deciding to stay in Ypsilanti, possibly due to his contract buyout amount. 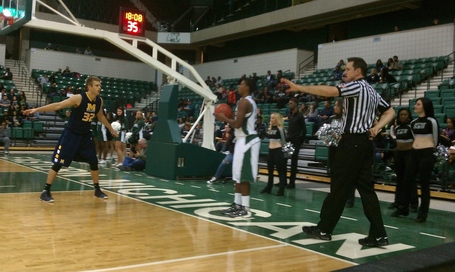 Although the Eagles lost four seniors from last year, including their two leading scorers, they're hardly an inexperienced team this year, and they should have plenty of scoring. The freshmen are a pair of guards, Ray Lee and Jalen Ross. Ross started and played significant minutes at point guard in EMU's one exhibition game this fall, and looked good doing it, so look for him to be a contributor there. Lee did not play in the exhibition game due to a minor injury, from which he should already be fully recovered; he is capable of doing well as either a point guard or a shooting guard, though from what I've heard he may be more natural in the latter role.

Ross and Lee by themselves would be nice additions, but hardly enough to get EMU fans excited for this year. What has got folks in Ypsilanti excited is the remarkable bunch of transfers who sat out last year and are now eligible to play. Da'Shonte Riley (center, transferred from Syracuse) we saw for half a season last year after the NCAA approved his hardship waiver. In exhibition play this fall, he looked unfortunately unimproved from last year, which is to say that he still looks unsure of where he should be, uncomfortable playing offense with his back to the basket, and just generally unimpressive, which is very disappointing given his rating out of high school and his size (7'). Daylen Harrison, who transferred from Wyoming, is a 6'6" swingman with a nice long-range shot. James Still, at 6'10", looks entirely capable of playing either spot at forward; given the Eagles' other personnel, he might end up spending most of his time at small forward, where he may have a minor size advantage over most opponents.

The real gem of the transfer players is Glenn Bryant. Although he's actual a smidge shorter than Still, Bryant's long arms and athleticism make him seem much bigger than the 6'8" at which he's listed, and he plays like a natural power forward. In their one exhibition game, he hit two of four three-pointers, six of nine inside the arc, and three of four free-throws for a total of 21 points (mostly in the first half), along with five rebounds, a steal, and a monstrous blocked shot. Oh, and I should add, that was all in just 22 minutes played! Simply put, Bryant is a game-changer at both ends of the court.

In my dreams, EMU comes out strong, rolling out to 6-0 (only 4-0 against NCAA Division I teams though) before hitting the rough part of the schedule. Even in my dreams they don't win at Syracuse or at Kentucky. But since we are dreaming, they do manage to beat Purdue in Ypsi and then bring me an early Christmas present in the form of a big win in Ann Arbor. With a win at UMass they could be 12-2 heading into MAC play, and only having to face the tough East Division teams once each, could be in position for an at-large NCAA tournament bid. Except that, of course, since I'm dreaming, they'll win the MAC Tournament.

OK, so that was closer to fantasy than dream. In reality, this is a team that should be able to at compete in almost every game, with just a few notable non-conference exceptions. At a minimum, I'm looking for this team to have a winning record heading into MAC play. Once they're into the conference season, there's absolutely no reason to think they can't repeat as West Division champions and land a #3 or #4 seed for the MAC tournament.