The second thing the MAC needed to aid a return to a BCS bowl was the obvious desperation of the Big East to retain their status among the AQ conferences. For whatever that's worth

Share All sharing options for: MAC to the BCS: Big East Thievery

After the WAC committed football hari-kiri on behalf of the Mid-American Conference, it was the Big East's turn to make the picture a little bit muddier.

Since the AQ Conference That Really Isn't was going to lose both Pittsburgh and Syracuse (two teams that may actually be back on the upswing) to the ACC in the coming offseason, they decided to do the only logical thing they could think of - poach teams from two different conferences and swell their numbers greatly.

They added Boise State and San Diego State from the Mountain West Conference for football-only membership, and then coerced Central Florida, Southern Methodist, Houston and Memphis to join the conference for all sports. I would argue that this does a lot more for the conference's basketball prospects than it does on the gridiron, but here is what that move looks like in our chronology:

Of course, all of this action left Conference USA staggering, as it turns out this movement cost them 50% of their 2012 championship game participants (UCF) and a program on the rise (SMU). So what could they do, but to give the Sun Belt Conference members a call, and see if any fishies bit their bait. Lo and behold, they found a couple of takers in Florida International and North Texas, like so: 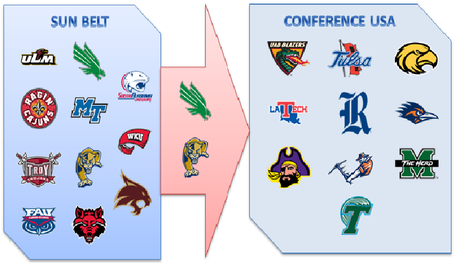 This at least put Conference USA back up to 12 teams total, allowing them to retain their conference championship and some semblance of credibility (relatively speaking) within this scramble of the have-not conferences to retain that opportunity at one last BCS longshot.

The big question, of course, is where does that leave us now?

Next up: An assessment of the non-AQ conferences heading into next season, and what that means for the MAC