MAC to the BCS: End Game For the No-Names

Where does all of the realignment leave us heading into the final season of the BCS and its standings?

Share All sharing options for: MAC to the BCS: End Game For the No-Names

Alright, now that we've streamlined the chronology of all the shifting that has taken place in the conferences in question, how does each of them stack up for the last season that a BCS at-large berth will be there for the taking?

Now that all the movement is settled, here is what the conferences will look like on opening weekend shortly before Labor Day, 2013: 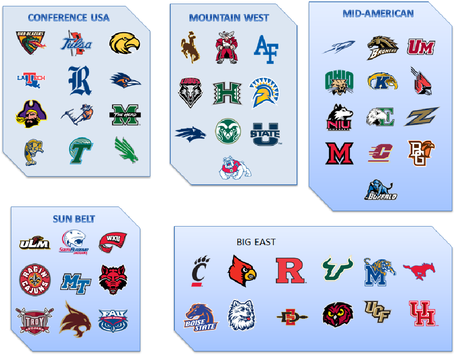 Big East: Well, the conference definitely got bigger - in fact, big enough that they could, in theory, have their very first conference championship game. I am unsure if they will do that, or if it will even make the conference better. As I said, they lost a couple of improving teams in Pitt and Syracuse, and replaced them with a very mixed bag. In Boise State, San Diego State, Louisville, Rutgers, Cincinnati and (depending on who you ask) Central Florida or Southern Methodist, there is a definitive high water mark. I don't see the conference improving enough that the eventual champion will struggle any less to crack the BCS top-20 than they did this season.

Conference USA: They likely made a lateral transition, as the four teams they added - as a whole - are about on par with the four teams that departed. Perhaps the very bottom got a little stronger with Memphis leaving, but again, I don't see this conference making massive strides towards "BCS busting" aside from adding a team (Louisiana Tech) that flirted with doing so this season.

Mountain West: They, too, made a lateral shift in overall power. They lost two of their best teams in Boise State and San Diego State, but replaced them with teams of equal quality in Utah State and San Jose State - I expect very little to change in this conference beyond which teams are at the top of the standings next season, and that includes a lack of presence in the rankings.

Sun Belt: Are we sensing a theme here? This conference lost one team that hasn't been competitive in a while (North Texas) and one that has flirted with that status off and on (FIU) and replaced them with only one team, Texas State, who is new on the FBS scene and wasn't even consistently competitive in FCS. Not that the SBC was ever really a BCS threat to begin with, but they likely take a small step backwards.

Mid-American: Here's the meat and potatoes. This past season, Kent State's Trayion Durham finished with 1,248 rushing yards. That had him 23rd in the country at the end of the regular season, and it was only good for seventh in the conference.

Add in Bowling Green's Anthon Samuel and Eastern Michigan's Bronson Hill, both of whom nearly missed 1,000 yards despite injuries and not being the starter all year (respectively), and that is offense-carrying talent in the backfields. Ohio, Northern Illinois, and Ball State all return their stud starting quarterback, and the landscape is littered with defensive and offensive line talent that isn't going anywhere just yet.

I don't know if next season will be a repeat of this one where the MAC sees a 6-6 squad as only its seventh best finisher, but I don't think the top half of the conference will get decidedly weaker, and that is something that I don't think can be said for the non-AQ conferences around them.

None of the other conferences got stronger by their team-shuffling, one disappeared completely, and their biggest competition for that at-large berth from this past season got out of their way by joining an AQ conference.

I would say things are smelling pretty rosey for the MAC for next season...or is it orangey?