Share All sharing options for: Video: Bowling Green's 1990 Upset Of No. 5 Michigan State

Michigan State is again ranked and will face BGSU Tuesday night, but in the much more 21st century-friendly Stroh Center.

• Also visible on the Michigan State bench are two familiar assistant coaches: Tom Izzo, MSU's current legendary coach, and Stan Joplin, who of course would go on to be Toledo's head coach and now the proud father of BGSU wide receiver Shaun Joplin.

• Despite the loss, All-American Steve Smith had a dynamite game, and it didn't stunt him from going onto a fine NBA career.

• A younger Michael Reghi still uses the word "out-STAND-ing" as efficiencly as he does today.

• Yes, '90s graphics and such, but there's something poetic about the name "SportsChannel." That is what we now call Fox Sports Ohio.

• One of the SICSIC members wearing a Bart Simpson mask, considered edgy at the time. They were only in Season Two, and five days later was the world debut of the episode "Bart The Daredevil," where he tries to skateboard over Springfield Gorge.

• The halftime interview MAC commissioner Karl Benson, who attended the game as it was a treat for a team like MSU to visit a MAC gym. Benson even hinted that Michigan State may never want to show their faces in Anderson Arena again, and he was right. And they alluded to the previous season in which Ball State reached the Sweet 16 - another watershed moment for the conference.

• God, that Anderson Arena student section was absolutely terrifying. From baseline to baseline. Opponents LOVED inbounding from there, I reckon.

The final score was Bowling Green 98, Michigan State 85 — an unheard of score by the MAC over the Big Ten even today. The beginning of the game looked like a rout for MSU, actually, when they took an early 10-point lead and leading scorer Clinton Venable had to go to the bench with foul trouble not four minutes into the contest.

Despite this game, BGSU would lose their next game at Western Kentucky 90-77, falter in the MAC tournament to Eastern Michigan in overtime, then lose to Wisconsin in the NIT, again in overtime.

Fifth-ranked Michigan state would eventually fall out of the top 25, finish with an NCAA tournament bid and bow out in the second round to Utah, coached by ... Rick Majerus, in his second year with the Utes after guiding Ball State to the NCAA tournament.

Also, let's take a look at Joplin, Heathcote, Izzo and one more time: 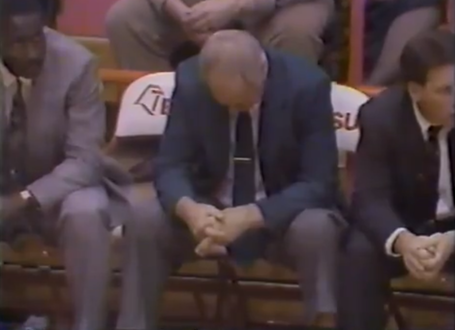