MAC to the BCS: De-Evolution of the WAC

From the current setup, the first thing that happened in our pseudo-chronology of realignment that will help the MAC get back to a BCS bowl in 2014 was the dissolution of the WAC, one transition at a time.

Share All sharing options for: MAC to the BCS: De-Evolution of the WAC

Now, I understand that the shifting of teams like deck chairs on the Titanic did not happen in anything resembling the streamlined chronology that I am presenting to you, but it made for a fun time creating the graphics, and I think it makes it a little simpler to understand, so just bear with me.

Going into the 2012 season, this is what the alignment of the non-automatic qualifier conferences (and the weakling Big East) looked like: 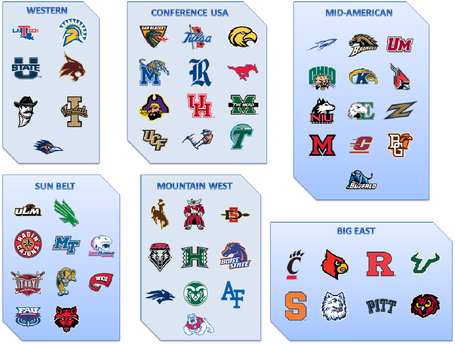 There's the setup that gave Northern Illinois their window - one of the best teams in the Sun Belt, Louisiana-Monroe, started the season hot but eventually faded in a conference that wasn't awful, but didn't really dominate anyone but each other.

The same could be said for all the other non-AQ conferences, but only the MAC and WAC had multiple teams with double-digit wins, though the WAC got a bump down since they were only a seven team conference.

In order for the Mid-American Conference's odds to improve, the first thing that had to happen is that, in all the rampant scurrying for television money, the Western Athletic Conference went the way of the dodo - as a football sponsoring conference, anyway.

Utah State and San Jose State, arguably the two best teams in this season's WAC (both appeared at the bottom of the BCS standings in the next to last week) defected to the Mountain West Conference.

Then Louisiana Tech and Texas-San Antonio up and skedaddled for Conference USA, while Texas State headed to the suddenly friendlier confines of the Sun Belt Conference.

This left Idaho and New Mexico State in limbo and wondering what to do, since they no longer have a football conference. I figure that looks something like this: 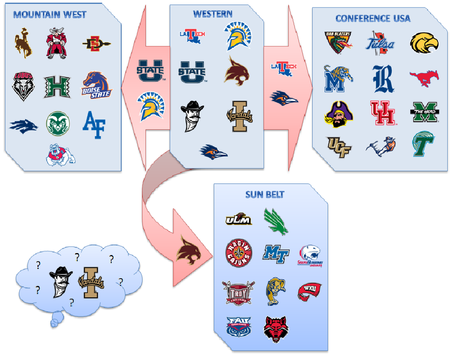 Well that's a huge bonus in and of itself, right there, as the Western Athletic Conference now no longer sponsors football, and dissolves from this equation completely.

Instead of four other non-AQ conferences competing with the MAC for that BCS at-large berth, now there are only three. It can only get better from here, right? Of course, and that's where our old friend the Big East steps in.

Next up: The red-headed stepchild of the AQ conferences makes a desperate effort to staunch the bleeding...