Ok, so this is a little late, but I needed the weekend in Detroit to sink in a little bit before I wrote this. There still is probably going to be some bias in this, so bear with me, but can you fault me? Here we go........

After 2 days of hockey, some very very good and exciting hockey, we have a CCHA Champion. The Western Michigan University Broncos outlasted a last Michigan surge Saturday to capture their first CCHA title since 1986, and only their 2nd title ever. This ensures their first ever back-to-back appearance in the NCAA tournament by virtue of the auto-bid.

We'll go over all 4 games, and look at the two NCAA-bound teams' chances in the tournament this weekend in this hockey update.


FRIDAY- GAME ONE: Western Michigan 6 - Miami 2. We started the fun with a MACh-up. Miami looked like the better team coming into the game, and came out dominating the action early. But then the Broncos struck. Western would score 4 goals on the CCHA Goalie of the Year, Connor Knapp, and knock him out of the game mid-way through the 2nd period. MU coach Enrico Blasi had few words after the game. "We just got outplayed."

GAME TWO: Michigan 3 - Bowling Green 2 (2OT). How do you follow a MACtion game? With double OT. Actually, this was somewhat depressing. Bowling Green had a 2-0 lead at one point, and then "puck luck" turned it's ugly head in the Wolverines favor. Michigan scored a weird goal late in the 2nd to make it 2-1. The puck jumped around after a chunked shot, and Hammond never saw it. After a late goal in the 3rd to tie it up, OT just looked like both teams tiredly making rushes at goals, and both goalies stood on their heads. After a turnover on the first shift in the 2nd OT, A.J. Treais stole a pass, made a move, and pushed the puck to the net, where Luke Moffatt pushed it in from a scrum and stole this one from the Bowling Green grasp. Andrew Hammond had 54 saves, but one save too few.

SATURDAY - THIRD PLACE GAME: Miami 4 - Bowling Green 1. Miami was playing with a fire in their eyes, and Bowling Green had just 14 hours outside the arena between games. The fact it was a 3 goal game is a miracle in itself. Miami had a 1-0 lead, and scored with 0.5 seconds left in the 1st to just completely demoralize the Falcons heading into the 1st intermission. To skate with this loaded RedHawk team, being THAT exhausted, 1-0 would've been a HUGE win in itself for the Falcons. Miami would add another in the 2nd, and when BG scored to make it 3-1, it looked like they might mount a comeback. Then Reilly Smith happened, and scored his 3rd goal of the weekend, while Hammond was trying to clear his view, to ground the Falcons

CHAMPIONSHIP GAME: Western Michigan 3 - Michigan 2. Michigan came out and showed no signs of fatigue. They looked fast, and crisply in the WMU passing lanes for most of the 1st period. Then, Ian Slater cleaned up a rebound from a JJ Crew shot and gave the Broncos a 1-0 lead after the 1st. In the 2nd, Dane Walters would score on a crazy rebound, and Chase Balisy would add another easy one to make it 3-0.

Then Michigan woke up. Michigan got a goal from Claire that just bounced over Slubowski's shoulder to make it 3-1. Then after an Ian Slater game misconduct for charging, Lee Moffie scored a one-timer that the CCHA Championship MVP couldn't get to. 6 minutes to go, and it was 3-2. Michigan had all the momentum and their fans had woken up. Somehow, the Broncos regrouped, and "Frank the Tank" stoned the Wolverines time after time. Western fell on the puck with 8 seconds to go, killing a good portion of a key faceoff before the game was over, and the celebration began: 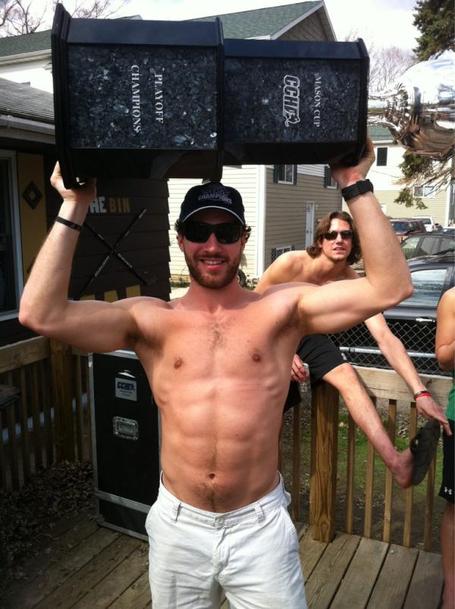 And now the focus turns to the NCAA tournament, and the match-ups our teams face. Let's start with the champion Broncos, and their regional.

Western Michigan - The Broncos are a 4-seed, and probably would've had their favored match-up in Union had they LOST the CCHA Title, but ask any Bronco fan, player, or coach, and they'll tell you having the Mason Cup is much more sweeter. Besides, they get a North Dakota team, that despite being extremely hot, has been playing a little short-handed, and with only 6 scholarship forwards (out of 12 per game usually).

While that might not seem like much, Western has a great set of defensive-men that will be looking to hold the always talented NoDak squad to tough shots. Should the Broncos win, they'll either get host school Minnesota or a tough Boston U team. The road to Tampa will not be easy. One last note: the Saturday game vs UND will be historic in that it will be the first game North Dakota will play without a nickname, as they had their Fighting Sioux name removed via NCAA actions for discrimination.

Miami - The RedHawks got a huge opportunity to go to Tampa. Their first game will be tough. UMass-Lowell has been sitting for an extra week since being bounced by Providence in the first round of the Hockey East playoffs. Never doubt the RiverHawks' might though. They tied with the aforementioned Boston U squad for 2nd in Hockey East, and were playing for a 1-seed before getting ousted.

Should Miami win, they would face either Union or Michigan State. Keep in mind that Miami just blasted MSU in the CCHA playoffs. Union, on the other hand, is the ECAC Champs, and is looking to give their conference a Frozen Four appearance for the first time since Cornell did it in 2003. Union is good, but could they hold down a Miami team that's been red-hot (save for Friday's game)?

Before I go, I have two things to do. First, I want to rank the 4 teams' fan sections from last weekend's games. I feel like I should recognize each school and their fan bases for their support.

4th Place: Miami University - Sorry RedHawks, but your fan base was fairly quiet. Sure I was sitting on the opposite side of the ice as you, but the numbers looked bad, and it just seemed like there was nothing there from you guys.

3rd Place: University of Michigan - This is hard, because Michigan easily outnumbered all other fans both nights, especially the Saturday game. However, their student section was small, they had the shortest drive, and they were quiet often. I don't just grade on numbers, but quality as well, and it just wasn't there.

2nd Place: Bowling Green State University - They beat Michigan because they had a slightly longer drive, they showed up Saturday even though their season was over, and they were fairly loud and into it. Sure they didn't have the numbers to match UM or WMU (I think), but they hung in their. Maybe some sympathy from me, but I think they well deserve this.

1st Place: Western Michigan University - I can already hear your cries, but hear me out. They were loud. Like, you can hear them over the UM Band and Fans during "Hail To The Victors" loud. They were always in the game, and were frequent with chants. They did a "Let's Go Bobcats" chant. Shoot, they even got the announcer to notice them. They Lunatics chanted "This Is Lawson" after both games, and they made it seem like a poor man's Lawson, which is hard to do in such a big place, with such small ratio. Anyone who was there and wants to dispute this, good luck.

Join our NCAA Hockey Pick'em Group to test your might against me and currently 4 other people. Just click here and register.

I wont do a live thread this weekend, as I don't have $300 for gas and a cheap hotel/motel to St. Paul. Games can be found on ESPN3, or ESPNU. Miami's game will be on ESPNU at 6:30 on Friday. The WMU game Saturday will be syndicated and re-brodcast after the game, so your best shot is ESPN3. Until then, enjoy your week and lace up for this wild finish