Was last night the highest volume of most-fun-to-least-fun I've ever had? It sure comes close. Yes, Bowling Green lost to Central Michigan in perhaps their worst loss of the MAC Tournament ever. And I'm a little bummed that my local Eastern Michigan Eagles were befallen by Northern Illinois in a puzzling loss. But then I think about those two particular teams who had nothing to root for this year.

And on the neutral observer plateau, everybody loves upsets.

I'd have to say that these two upsets, coupled with close games in Toledo and Kalamazoo, made it the most memorable first round in MAC basketball history. And I have to admit: this set-up was pretty damn mind-blowing: 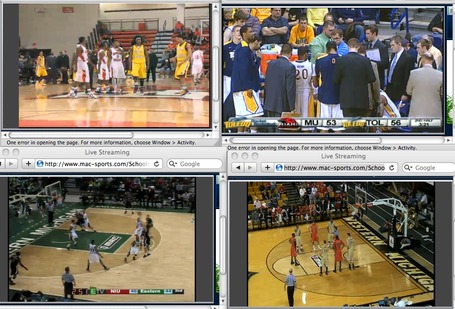 (And not to keep throwing praise on them ... but free streaming basketball games has made this conference immensely more fun and easier to cover. Why is not every mid-major team doing this?)

So on to Cleveland we go. Central Michigan takes BG's place as they face Toledo on Wednesday night and Northern Illinois has even even better chance to reach the quarterfinals if they can upset Western Michigan on a neutral court. Don't ever let the madness end.