Stuff going on in the MAC, because stuff is happening:

• Central Michigan was was supposed to host Navy on Saturday, October 13, but doggone it, that likely wasn't going to be televised. They rarely are on Saturdays. Solution: move it to Friday! Now ESPN2 is going to televise the game, which is now going to be on October 12 at 8 p.m. as part of CMU's "Military Appreciation Night." Well, time to clear that night's schedule as well.

It doesn't seem like a bad deal, even though Friday nights seem like a cheatin' way to get "weeknight football." Friday nights are a sentimental and fundamental part of the weekend to not only young'uns but old farts as well. At least they're alone on that day for now. Perhaps another game will get moved there as well on, say, ESPN, but for now that's the only October 12 game on the FBS docket. Let's just hope CMU isn't still the MAC West bottom-feeder by then, although they oughtn't be. [MAC Sports]

• Another loss from the MACsketball ranks is Freshman of the Year contender Brian Sullivan, the Miami sharpshooter who requested a transfer and got it. That's now two of the All-Freshman team (along with Austin McBroom) have parted ways with MAC schools. [@mollautt]

• Eastern Michigan seems to have a new alternate helmet this season: [via Eagle Totem] 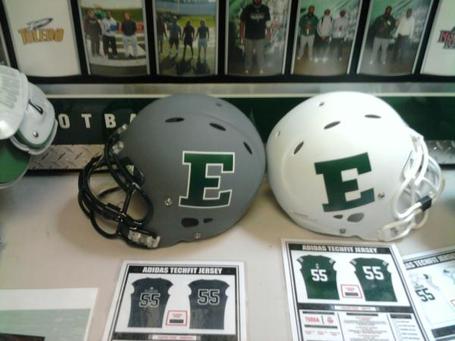 Looks pretty spiffy on its own. But I wonder how muddy it will look with a dark green uniform.

• Bill Connelly really, REALLY likes Miami to make a run in the MAC East. A lot of factors seem to be going on here: their own luck, their returning players, the departure of Temple and well that's about it actually. [SB Nation]