Share All sharing options for: MACsketball Greatest of All Time Tourney: Akron

It's finally here, folks. Your summer reading list begins today, as we start introducing the participants in our GOATT for men's basketball. We will kick things off with the top of the alphabet and the University of Akron.

I've always found it interesting to look at players who were amazing during their time as a collegiate basketball player but fizzled out if and when they turned professional, as well as those who never really lived up to the hype that was attached to their name (justly or not).

Well lucky for you, we've got one of each of those today! To the details...

Romeo Travis (2004 - 2007) - Romeo played his high school basketball at the famed Saint Vincent's-Saint Mary's High School with LeBron James for three years, where he averaged 17 points and 11 rebounds per game. If you'd like more info about that, there was a little documentary called "More Than A Game" which may fill you in. During his time with the Zips, he averaged 12.2 ppg, 6.4 rpg, and totaled 171 blocks. He went undrafted by the NBA, so he headed to Europe as many before him have. With Hapoel Gilboa Galil of the Israeli Super League, Travis continues to build a reputation - he averaged 17.7 ppg 6.5 rpg this season and tried to bodyslam a dude last season (No. 11 in yellow):

Joe Jakubick (1980-84) - Jakubick finished his collegiate career averaging 23.9 points per game, a pace that left him as the all-time leading scorer at Akron as well as first all-time in the Ohio Valley Conference (he still holds that first record). He was drafted in the seventh round of the 1984 draft by the Cleveland Cavaliers, but doesn't appear to have ever played a game for them (which he still seems less than thrilled about). As a nice symmetry to Mr. Travis above, he is now the girls basketball coach at Saint Vincent's-Saint Mary's. 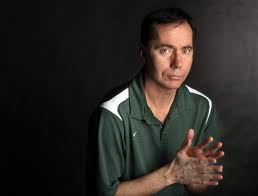 Come back in a few days when we move on to our next tournament representative from the Ball State Cardinals alumni roster! (I bet you know who it is).