Share All sharing options for: MACsketball Greatest of All Time Tourney: Ball State

It's finally here, folks. Your summer reading list roll on, as we start introducing the participants in our GOATT for men's basketball. Part one dealt with Akron, and now we turn our attention to Ball State.

Some of the time, even a player from a relatively unknown basketball conference like the MAC can play so well that he not only gets drafted into the NBA, but gets drafted by one team and then gets dealt to another the same day in exchange for the top pick in the following year's draft. It's likely that if I told you that moment was one of few career highlights for our Cardinals representative, you now know exactly who I am talking about.

Lets cruise past the jump, shall we? 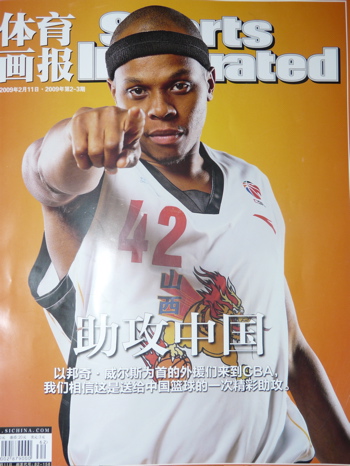 Bonzi Wells - (1994-98) - Gawen DeAngelo "Bonzi" Wells, who earned his nickname because his mother was a Bonbon junkie, was quite the player in his MAC career. With three games left in his senior season, Bonzi passed Ron Harper as the conference's all-time leading scorer, a mark that still stands to this day. He was drafted by the Pistons in the 1998 NBA draft and immediately swapped to Portland for the Blazers' first round pick the following year.

He was best known in the NBA as part of the Portland "Jailblazers" in their heyday - and for playing well whenever he felt like it. Wells eventually went on to play for five different teams in the second half of his decade-long NBA career. During that time, the most significant moment came at the end of the 2005-06 season.

Wells had been a key in Sacramento's playoff run, going from 13.6 ppg and 7.7 rpg in the regular season to 23 and 12 in the postseason. After that, he hit free agency, at which point "Ron Artest" offered to give up his whole salary to keep Wells in the fold. Instead, Wells turned down a five year deal (worth somewhere between $36 and $39 million) from the Kings - and wound up settling for a two year, $5 million deal with the Rockets because he was in such high demand.

Wells last played in the NBA in the 2007-08 season. He was traded to the Hornets at the 2008 deadline,and then chose to go to China rather than sign for the NBA veteran's minimum the following season. He lasted 14 games overseas, and then decided not to return to China after the team's break for the Chinese New Year - at which point they rightfully terminated his contract. By the way, that photo above of Bonzi standing so prominently on the cover of SI China hit newsstands within days of his release. The entire China ordeal actually wound up as part of a book, Brave Dragons: A Chinese Basketball Team, an American Coach, and Two Cultures Clashing.

The following season he signed in Puerto Rico (and played a whopping three games), and the year after that, nothing. This past offseason he had a workout with the Knicks and then went to camp with the Timberwolves, but no luck with either - though he is supposedly In The Best Shape Of His Life right now. He has come a long way - in a number of different ways - but still hasn't quite rode off into the sunset just yet.