HUNTINGTON — Your classic decisive victory as we were accustomed to seeing from the Herd. Chad Pennington threw for 314 yards and three touchdowns on 19-of-26 passing. Nate Poole had six catches for 92 yards and two touchdowns. For NIU, Michael Turner ran for 91 yards on 24 carries and Josh Haldi went 29-for-50 passing for 351 yards, three touchdowns and an interception.

AKRON — A bit of drama in the final minutes as Akron drove 84 yards on eight plays to score a Charlie Frye to Mike Brake touchdown with 2:44 left in the game. Frye finished the game with 183 yards on 15-for-23 passing and two touchdowns. For Temple, Bernard Pierce was a workhorse rushing 170 yards on 31 carries, scoring two touchdowns.

MUNCIE — Well, they can't all be high-scoring ones. This tied BSU's lowest output of the year (their bowl game loss to Tulsa) but CMU had a pretty great defense. Dan LeFevour had just a mediocre game (11-for-22, 167 yards, passing touchdown; 20 carries for 33 yards) but Antonio Brown had a reception touchdown and a rushing score, the latter accounting for the game-winning score with 2:18 to play. Briggs Orsbon had a productive day catching five balls for 142 yards and MiQuale Lewis totaled 119 total yards from scrimmage.

BUFFALO — Well of course the past season's most exciting team gives us an overtime game. And even the play-by-play threw in an insane finish. First, UB overcame a 14-point deficit in the fourth quarter to tie it. Then with a second left on the clock, UT's Terrance Owens threw a 47-yard pass to Bernard Reedy who made it all the way to the 17-yard line before being pushed out of bounds at the 17-yard line. A field goal was all they needed in OT as Buffalo's chance to force as second overtime with a 50-yard field goal failed.

Adonis Thomas went off for 121 yards rushing on 23 carries and two touchdowns, along with 44 more receiving yards. Drew Willy for Buffalo threw 239 yards on 20-for-34 passing and three touchdowns. Naaman Roosevelt collected 102 of those yards on six catches, two of them for TDs. Tom Drewes also sacked the quarterback twice.

OXFORD — BGSU capitalized on a turnover early to take a quick lead, but the 03 RedHawks were never able to be stopped for four quarters. 42 straight points put the Falcons out of commission, led by Mike Smith who ran for 101 yards on 18 carries and scoring two touchdowns, along with 47 receiving yards. MU's Calvin Murray also ran for two touchdowns and the defense sacked the QB four times, including two by Terrell Jones. For BG, Omar Jacobs tossed 314 yards and one touchdown on 26-for-34 passing.

YPSILANTI — Not that it wasn't close but ... it wasn't very close. Robert Sanford ran for an amazing 258 yards on 31 rushes, scoring once. Neither quarterback did particularly well but EMU's Eric Deslauriers finished with 110 yards on six catches. Again I feel bad that I had to include SOME team from Eastern but, hopefully, they get a few wins.

TOLEDO — You can sense the disappointment even in a simulat'd game of building a 13-point halftime lead on the road and then losing it. Here's where it gets wacky: Kicker Brian France hit the game-winning field goal with 18 seconds left ... from 58 yards away. Chester Taylor would run for 196 yards on 25 attempts, scoring one touchdown. The Rockets defense registered six sacks, three of htem by Jim Barker. For OHIO, Tyler Tettleton threw two touchdowns but only completed 12-of-23 passes for 177 yards.

KENT — OK, this was the first one I really saw with mouth agape. KSU is one of the "lesser" teams and while '97 Miami is a wild card, they were supposed to be a running beast, but Travis Prentice only accrued 66 yards on 25 rushes. Meanwhile, Josh Cribbs manned the offense for 65 rushing yards on the ground (and a touchdown) as well as a 2-point conversion. He was only 8-for-12 passing for 113 yards and an interception. Nashville Dyer ran back an interception for a touchdown as well and Dave Pavich kicked three 40-plus field goals. For Miami, Sam Ricketts passed just 20-for-39 but for 247 yards with a TD and interception. 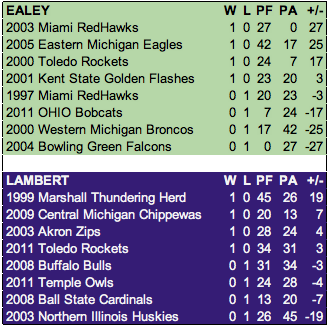