This week, we've got a 2008 MAC Championship Game rematch, a last-minute winner in Bowling Green, another close one in More Recent Toledo, and when the dust settled, four undefeated teams.

MUNCIE — You knew that the '08 MACCG was an upset, and this sim proved as much. A monster game was had by MiQuale Lewis who had 156 yards rushing, 55 receiving and four total touchdowns. Nate Davis passed for 268 yards on 22-for-34 attempts and two touchdowns. Basically unfair.

Drew Willy gave the Buffalo offense four touchdowns and an INT on 23-for-36 passing and 297 yards while James Starks ran for 183 yards on 26 carries.

PHILADELPHIA — No bias toward newer teams, it seems. Chad Pennington passed for 378 yards on 32-for-44 passing and four touchdowns, even though he was sacked four times. James Williams caught two touchdowns among his four receptions. Marshall's Doug Chapman also ran 24 times for 155 yards, scoring twice. He bested Temple's Bernard Pierce who ran 24 times for 147 yards. As for the passing team ... yeah, we'll move on. Brandon McManus was essentially the team's offense, kicking three field goals — all under 40 yards. See, they even simulate stalled drives!

DEKALB — Field goals! Nothin' but field goals! Well, there were touchdowns but NIU's Steve Azar blasted five field goals (of lengths 28, 43, 24, 28, and 48) and Andrew Aguila hit three (43, 36, 48) while missing two others. The passing games were both erratic — Josh Haldi threw two TDs and two picks on 22-for-34 passing and 264 yards. Dan LeFevour had a quite terrible game: 12-for-26 and 145 yards. CMU's Bryan Schroeder ran for a touchdown and the defense collected four sacks and the two aforementioned picks but, sorry, five field goals and you win. Oh, and Michael Turner ran for 155 yards on 22 carries. That helps too.

AKRON — It doesn't take a simulation to conclude that the '11 Rockets are responsible for 20 percent of all manufactured points in college football. It's their greatest export, really. Adonis Thomas had 171 yards rushing and 49 receiving to go with his two rushing touchdowns. Terrance Owens threw for 360 yards and two TDs on 28-for-38 passing. Eric Page caught 11 balls for 134 yards along with those two TDs.

BOWLING GREEN — Eep! A close game was almost lost by one of 2004's best. Omar Jacobs led a 75-yard drive in the final two minutes ending in a touchdown pass to P.J. Pope with 41 seconds to go. Jacobs threw two touchdowns and 269 yards on 21-for-34 passing. OHIO's Tyler Tettleton had more yards: 18-for-34 and 337 yards, two touchdowns (one rushing) and an interception.

YPSILANTI — A big game for Travis Prentice of Miami: 32 carries, 142 yards, two touchdowns. Sam Ricketts went 14-for-21 with 210 yards and a touchdown. For EMU ... three field goals. Womp, womp. And I'm pretty sure this simulation, if nothing else, will get the young kids interested in Travis Prentice, because who picks up books anymore?

TOLEDO — Another dandy finish with a Toledo team. They just know drama, don't they? Josh Cribbs had the ball 30 yards away and took some shots at the end zone with time expiring but couldn't connect with anyone. Chester Taylor led the Rockets with 118 yards on 29 attempts and two touchdowns. That was about all they got on offense but that's all they needed. KSU was led by David Alston who ran for 147 yards on 16 carries and Dave Pavich kicked three field goals. 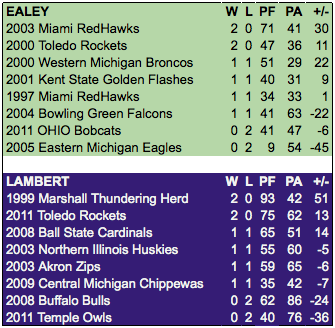