I'm back on the grid and appreciate the feedback on this experiment so far. A couple more notes on the methodology behind teams I picked, which raised some questions: During the team selection process, when it was between, for example, 2003 Northern Illinois (who didn't win a MAC championship) and 2011 Northern Illinois (who did win a championship), I pitted the two against each other in a neutral setting a couple dozen times and deferred with the one that did better. It may not have been the best way to pick teams but that's what I did.

This week we have an OHIO-Miami rivalry, a rematch of the 2011 Toledo-Temple beatdown (still in Philly), Chad Pennington facing Dan LeFevour (drools), and an overtime thriller in Bowling Green featuring a five-sack day.

OXFORD — It's been a while since a Miami team has been able to beat OHIO but unfortunately for the RedHawks this one doesn't count. Ben Roethlisberger passed for 318 yards and four touchdowns on 20-of-23 passing. Calvin Murray ran for 141 yards on 16 carries and two touchdowns — and caught a third one. The defense registered five sacks, two by linebacker Derek Rehage. OHIO's Tyler Tettleton threw 22-for-33, 225 yards and two touchdowns each to Donte Harden and LaVon Brazill, along with one interception. And, hoo boy, this isn't looking good for OHIO.

KALAMAZOO — Every once in a while the simulator likes to spit out one for the defensive players: a total of eight were made here, five by Miami and three by JoJuan Armour. WMU's Jeff Welsh threw for two touchdowns and a pick to go with his 290 yards on 20-of-28 attempts. Fun footnote: the winning touchdown in the fourth quarter was caught by Val Ragainis, a tight end who during the 2000 season caught only two passes, neither for a touchdown. And from what I can tell, never got a touchdown during his playing career. So, hey, career day!

HUNTINGTON — Closer than it looked, justing that Marshall kicker Billy Malashevich kicked four field goals, including two from 49 yards out, and CMU had to rally in the fourth quarter, and both touchdowns were on plays over 50 yards. But Marshall got another great game from Chad Pennington: 22-for-31, 310 yards, two touchdowns. Defensive tackle Giradie Mercer had two sacks for the Herd defense. CMU had Antonio Brown catch seven balls for 127 yards, including one of those long touchdowns. Dan LeFevour's line: 16-for-27, 231 yards, a touchdown and an INT. He also scrambled 19 times for just 12 yards, factoring in those four sacks.

And among Dream League games, this one would've been so ridiculously great to actually watch. [drools]

PHILADELPHIA — The more things change ... the more the same game gets re-played. The actual 2011 matchup had UT winning at Lincoln Financial Field with a 36-13 score ... so, yep, simulator knows what it's doing. Adonis Thomas was hurt in The Actual Game, but in this one he rushed for 139 yards on 25 carries, two touchdowns and added 39 yards of receiving. Eric Page caught 10 balls for 107 yards and a TD. Not much stat-wise on the Temple side: Bernard Pierce mustered 82 yards on 26 carries and Matt Brown ran for a touchdown and that's about it.

DEKALB — Possibly an upset, but it wasn't the result I imagined. Running back James Starks combined for FOUR touchdowns: three rushing, one receiving, and 198 yards overall. Naaman Roosevelt had seven catches for 100 yards even and Drew Willy's numbers were 21-for-26, 267 yards and a TD. Additionally A.J. Principe went 4-for-4 on field goals, long of 50. For NIU, Michael Turner ran for 154 yards on 29 carries and two touchdowns, adding another 37 yards receiving. Just a gentle reminder that the 2008 Buffalo team was a harmonious balance of lucky and good.

AKRON — Nate Davis passed for 283 yards on 24-for-33 passing, two touchdowns and an INT. Briggs Orsbon caught the two TDs and Dante Love caught seven balls for 85 yards, as well as ran in a touchdown. MiQuale Lewis totaled 151 yards rushing and receiving to boot. Akron's Charlie Frye had similar numbers to Davis (21-for-33, 358 yards, 2 TD, INT) and Miquel Irvin caught both touchdowns to go with 82 yards. Cam Yeow registered two sacks and, hey, can we blame the kicker? Jason Swiger went 1-for-4 on them, although two of them were from beyond 45 yards.

BOWLING GREEN — I don't care if it's fake. I'm pretty sure I saw this game out of BG, oh, at least once a year for the last 10 years. Furious comeback followed by disappointment at the end. The PBP on this game is insane. KSU was stuck with a 4th and one with a minute left and Josh Cribbs threw a 63-yard touchdown to Neil Buckosh to tie the game. BG's Shaun Suisham missed a 50-yarder as time expired to win the game, then shanked a 40-yarder in overtime. DeMario Rozier ran for a 16-yard score for the Flashes to seal the win.

Antonio King was the player of the game for Kent State with five sacks. Nate Wesley also sacked the QB twice. Offensively, David Alson ran for 100 yards on 15 carries and a touchdown. For the Falcons, PJ Pope got a touchdown as well as 98 yards on 20 carries. Omar Jacobs passed for 317 yards on 24-for-33 passing, two touchdowns and a pick. Charles Sharon caught seven of those passes for 128 yards and Cole Magner collected both receiving touchdowns. And Shaun Shuisham went 1-for-5 on field goals, missing three times 40 yards inward.

YPSILANTI — I sort of knew the EMU team was going to be the weak link; they're the only ones who couldn't produce a winning-record team. But I hope they'll win at least one of these. Toledo's Chester Taylor rolled up 272 yards rushing, 50 yards receiving, and a touchdown each way. Tavares Bolden also passed well, 18-for-26, 210 yards and three touchdowns. The score could've been much worse since Todd France went 4-for-4 on field goals, all under 30 yards. EMU also had four field goals by Andrew Wellock, but much longer: 38, 46, 49 and 50 yards. That was pretty much it. 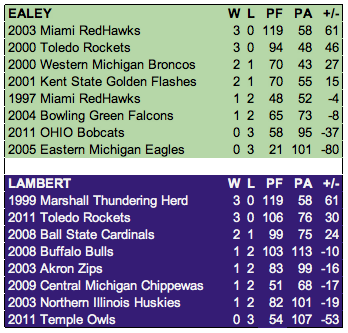