This week we begin interdivisional play with four 3-0 teams all playing road games. We also have both winless teams (2011 Temple and 2005 EMU) playing each other ... something has to give. Additionally, one matchup features one of the unlikeliest, silliest and yet actual simulated scores we've seen to date.

The interesting game, however, is 2003 Miami vs. 2003 Northern Illinois. It's a juggernaut vs. a very impressive team that tapered off just enough to be third best. Unfortunately these two teams didn't play each other in actuality so this sim is the next-best thing we have.

DEKALB — Another close road win against an underrated team for the '03 RedHawks, who stay undefeated. Ben Roethlisberger threw his first INT of the season but otherwise went 27-for-37 with 304 yards and three touchdowns. Calvin Murray ran for 83 yards on 17 carries and a touchdown and also caught three balls for 35 yards. Martin Nance led the receivers with six catches for 95 yards and a TD and Derek Rehage recorded two sacks.

For NIU, Josh Haldi went 22-for-32 with 286 yards and three touchdowns. Michael Turner ran 27 times for 150 yards, along with a receiving TD. Shatone Powers caught five passes for 82 yards and two touchdowns while P.J. Fleck led the corps with 92 yards on seven catches. The last touchdown for NIU was with two seconds to go (failed 2-point conversion), so it really wasn't that close at the end, although they did hold a 17-14 lead in the second half.

And with this game, Roethlisberger's QB rating for the dream season comes to a crisp 201.1, which is absurd. His QBR in 2003 was 165.8, which was still amazing.

KENT — I was a little hesitant putting the '11 Rockets in there, other than to see where the wildness went, but the simulator very much enjoys their offense and general mayhem. They even came up with the first safety of the Dream League!

UT's Adonis Thomas ran for 150 yards on 22 carries, adding a touchdown; he also caught three balls for 39 yards and a second TD. Eric Page had 95 receiving yards on six catches and a score, while Terrance Owens passed 24-for-36, 380 yards, 3 TDs and an interception. Ryan Casano went 4-for-4 on field goals, long of 39.

For Kent State, Joshua Cribbs had three passing TDs on just 9-of-19 passing and 133 yards. He also rushed 20 times for 77 yards. David Alston ran 15 times for 122 yards and caught one pass for a 9-yard touchdown. James Harrison sacked the quarterback three times.

BOWLING GREEN — Another week, another rout. Chad Pennington passed 20-for-31 for 346 yards, two touchdowns and a pick. Nate Poole caught six balls for 105 yards and a touchdown; Doug Chapman ran it 23 times for 64 yards and two touchdowns. BG got 103 yards from P.J. Pope on 103 carries, and Omar Jacobs passed 14-for-21 times for 181 yards, adding a rushing touchdown, their only end zone trip which finally occurred with 1:46 left in the game.

AKRON — Classic finish? Classic finish. The Zips rallied after being down 27-7 in the second quarter, then took the lead on a Bobby Hendry rushing touchdown with 4:15 left in the game. WMU's Brad Selent kicked a 26-yarder to tie the game in OT. In the second overtime the Broncos held Akron on a goalline stand, forcing a field goal, then Robert Sanford scored on the very next play for WMU. Sanford had 24 carries for 194 yards and three touchdowns.

Also for WMU, Steve Neal had 106 yards on five catches and a touchdown. Jeff Welsh went 23-for-34 with 333 yards, two touchdowns and two interceptions. Marty Harig recorded two sacks and Ronald Rogerts picked off two passes. Selent went 3-for-4 on field goals, long of 46, missing from 44.

For Akron, Hendry went 95 yards on 31 tries, scoring three times. Chase Blackburn and Jay Rohr each sacked the quarterback twice and Rickey McKenzie had two interceptions. Jason Swiger also went 4-for-5 on field goals, long of 46 and missed from 41.

This ... I don't know what the heck happened here. Looks like CMU just kept running the ball with everyone and it worked so they went with it. Antonio Brown ran 10 times for 162 yards and two touchdowns, adding 33 yards receiving. Carl Volny and Dan LeFevour each had two rushing touchdowns too, and LeFevour's passing numbers were pretty cool: 16-for-19, 181 yards. The defense also had six sacks of Tavares Bolden.

The Rockets only points were Todd France field goals, and with a really surprising thud the unbeaten 2000 squad — who only lost one game all actual season and never allowed more than 30 a game — go down hard.

BUFFALO — Another great one from James Starks: 31 carries, 108 yards and two touchdowns. Naaman Roosevelt had 7 receptions for 128 yards and Drew Willy passed 20-for-27 for 256 yards, throwing no TDs and an interception. Miami's Sam Ricketts actually had a better game, although not rating-wise: 24-for-38 for 289 yards and two touchdowns, while Travis Prentice ran 17 times for 78 yards and a score.

The difference might've been the kickers, though: Buffalo's A.J. Principe was a perfect 5-for-5 on field goals, long of 43 (twice), while Miami's John Scott was 1-for-4, missing from 42 and 44 twice.

ATHENS — Large game for Nate Davis: 22-for-32, 379 yards, four touchdowns and an interception. Dante Love caught two of those touchdowns to complement 6 catches and 113 yards. MiQuale Lewis ran for 111 yards on 18 carries and a touchdown, while catching four passes for another 68 yards.

The OHIO offense had Tyler Tettleton passing for 311 yards on 20-for-32 attempts, throwing two TDs and an INT. Donte Harden ran for 102 yards on 23 touches and a touchdown and also caught a touchdown among four catches and 27 yards. Donte Foster hauled in three passes for 126 yards and the other TD, and the defense gathered five sacks, led by Nic Barber with two.

YPSILANTI — The simulator apparently doesn't enjoy simulating a bunch of turnovers. This game had none, although this one looked like it should have at least four or five total. Andrew Wellock kicked two field goals and Dwayne Harrison ran for a late touchdown to go with 88 yards on 10 carries. Temple's Bernard Pierce ran 30 times for 92 yards and Quinten White sacked quarterback Matt Bohnet twice. 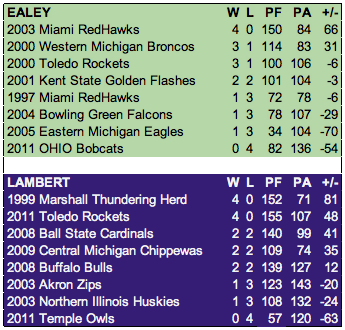