Also, this week we are simulating all games with HEAVY WIND. Hey, it's the Midwest. It happens sometimes.

OXFORD — Ben Roethlisberger had 298 yards passing on 23-for-33 attempts, three touchdowns and an interception. TDs went to Matt Brandt (2 catches for 92), Michael Larkin (5 catches for 57) and Martin Nance (5 catches for 56). Calvin Murray ran for 110 yards on 17 tries.

CMU did outrush the RedHawks because that's what they do, but just a measly Andrew Aguila 21-yard field goal on the scoreboard for them. Bryan Schroeder ran 12 times for 94 yards and had 21 yards receiving. Antonio Brown led the team with seven catches for 73 yards. Dan LeFevour's numbers: 13-for-24, 130 yards and 19 carries for 48 yards. Not all that efficient.

So Miami opens up a two-game lead in the Ealey while CMU is falling backwards.

KENT — Thought this might be a trap game, but the Golden Flashes defense was overwhelmed.

Kent State's defense mustered the two previously-mentioned INTs and two sacks (yes, Antonio King got one too … I don't understand this). Chante Murphy ran 12 times for 60 yards and their two lone touchdowns. David Alston had 100 yards on 17 attempts. Josh Cribbs was a mere 5-for-21 for 78 yards passing but ran for 75 yards on 21 carries. Strange stuff. He should consider converting to punt returner at the next level.

BOWLING GREEN — Hey WHAT DID I TELL YOU ABOUT TRYING TO RALLY FROM BEHIND IN... sorry, I thought this was a sentient team for a moment. The Falcons cut the lead to eight with a touchdown plus 2-pointer with 1:16 to spare but didn't get the ball back.

The Rockets stay perfect as Adonis Thomas ran for two touchdowns and 86 yards on 22 carries. Morgan Williams helped out with 66 yards on 18 carries and a score. Eric Page caught 11 passes for 124 yards and Terrance Owens did throw for over 300 yards but no touchdowns and two interceptions.

The Falcons got 249 yards and three touchdowns from Omar Jacobs on 22-for-43 passing but also threw two picks. Keon Newson picked off two passes of his own. And Charles Sharon caught two touchdowns and 68 yards on six receptions. But they're fading fast from the Ealey division, but they get one more crack at a Toledo team to split the rivalry series.

Also, a thought: should I be using Austin Dantin for 2011 Toledo games too? He's getting nothing over here. They do use a two-quarterback system there. I think the next game will be a Dantin game.

ATHENS — And heeeeere come the Bobcats. Ball State tied the game with 1:34 left as Nate Davis threw a 34-yard touchdown to reserve wide receiver Madaris Grant, then could only muster a 38-yard field goal in overtime. Then Tyler Tettleton's 11-yard pass to Riley Dunlop sealed the victory.

Tettleton had quite a game: 21-for-31, 301 yards and two touchdowns. He also ran 17 times for 89 yards and a rushing score. Dunlop caught both touchdowns despite just 23 yards on four catches; LaVon Brazill had four catches for 89 yards. Donte Harden ran 22 times for 99 yards and added 61 yards receiving. And the wind clearly affected Matt Weller: he was just 1-for-4 on field goals, missing from 43, 45 and a 55-yarder at the end of regulation.

For the Cardinals, Nate Davis passed for 233 yards on 18-for-32 attempts, two TDs and an interception. MiQuale Lewis ran for 144 yards on 20 carries and got 31 yards receiving. Dante Love led BSU with 84 yards receiving on five catches and a score.

Suddenly the Bobcats are just a game back of second place in the Ealey Division. Meanwhile, Ball State is two back in the Lambert.

TOLEDO — Good finish generated in this one. Down three with 3:03 to play, Michael Turner capped off a 79-yard drive on a 19-yard rushing touchdown with 55 seconds left, then the defense picked off Tavares Bolden to seal the game. Turner had 20 carries for 100 yards and that game-winning touchdown, adding 2 catches for 85 yards and a receiving touchdown. Josh Haldi threw for 337 yards on 17-for-31 passing, three touchdowns and an interception. The defense accounted for five sacks.

For UT, Bolden passed for 232 yards on 18-for-28 passing, two TDs and that interception. Brandon Hefflin ran back a 62-yard interception for a score and five other players sacked the QB. Chester Taylor led the team with 97 yards on 28 carries.

And what's wrong with 2000 Toledo? After starting 3-0 they've lost four straight. Since this is all random ... nothing. Nothing is wrong. The numbers are wrong.

KALAMAZOO — Long before the days of "Beast Mode," Robert Sanford had a Beast Mode-like game: 30 carries, 242 yards and four touchdowns; three of those were in the first quarter and two of them were of runs on 38 and 56. Jeff Welsh went 21-for-28 passing for 272 yards and two TDs. WMU is sitting pretty in the Ealey division, tied for second place but with a much better scoring differential.

YPSILANTI — They trailed for the better part of three quarters but the Zips broke through with a decisive TD by Jerell RInger with 10:25 left in the game and then a Charlie Frye-to-Nick Sparks long bomb for 81 yards to seal the game. Sparks recorded 115 yards overall on five catches. Bobby Hendry ran 22 times for 92 yards and a TD.

EMU kept it close, at least. Anthony Sherrell ran for 147 yards on 18 carries. Darren Matthews had two sacks, Daniel Holtzclaw had two interceptions and a sack, and Andrew Wellock went 4-for-6 on field goals, long of 44 and missing from 29 and 46. And Matt Bohnet did throw for a touchdown, his first on the year, and now everybody in the league has at least one. (The next fewest: five.)

With five games left to play, EMU cannot win the Ealey Division outright. But you probably knew this.

OXFORD —The Owls actually passed for a touchdown from Chester Stewart to Evan Rodriguez with 1:08 left, but needed a good onside kick and didn't get it. Travis Prentice had 154 total yards (77 rushing and 77 receiving) and a rushing touchdown. Dustin Cohen added two sacks.

With the loss, and wins from Marshall and 2011 Toledo, Temple is eliminated from postseason consideration. 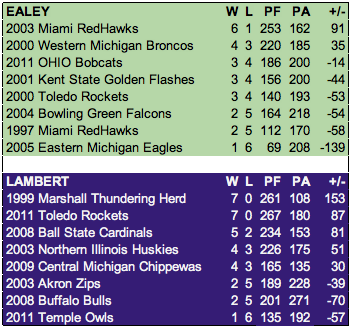