The best game, without question, was 2011 OHIO hosting 1999 Marshall. The Bobcats entered the third quarter with a 20-9 lead over the undefeated Thundering Herd. Remember, the Bobcats started the simulation 0-4 and have won three in a row since. They're no pushover.

Early in the fourth quarter, Marshall closed the deficit with a Llow Turner 8-yard touchdown with 10:57 left to go. A 2-point conversion by Chad Pennington failed, so the lead was still 20-15 in favor of OHIO. Still plenty of time.

The subsequent drive ended in a Donte Harden fumble at the Herd 25-yard line. Marshall couldn't capitalize; they had to punt with 4:07 left. The Bobcats tried to milk the clock and burned two Marshall timeouts but had to punt it away on their own 35 and got a decent return to their own 43-yard line. The final drive.

ATHENS — ...Pennington would find Nate Poole for a 23-yard reception, keeping the game alive. And on the final play of the game, 26 yards away from the end zone, Pennington connected with James Williams for the game-winning score. What a finish.

Along with that game-saving catch, Poole had six catches for 160 yards. Pennington was just 16-for-29 with 283 yards, that touchdown and an interception. Billy Malashevich made all three of his field goals, long of 49.

OHIO had their chance. Harden had the big fumble but also scored two touchdowns on 21 carries for 78 yards. Tyler Tettleton passed for 200 yards even on 15-for-24 passing and also carried it 14 times for 59 yards. Matt Weller went 2-for-4 on field goals, missing twice from 43 and 49, made a long of 48.

Oddly Marshall registered no sacks or interceptions and even though they held the Bobcats to 20 points overall, it was their offense that was surprisingly inconsistent. But they remain undefeated, both in real and fiction.

OXFORD — Ou-uu-uu-uch. Calvin Murray ran for 191 yards on just 20 carries, scoring twice. Mike Smith also added two scoring TDs on 18 carries for 69 yards, and 47 yards receiving. Ben Roethlisberger passed for 273 yards on 22-for-30 passing and three touchdowns but threw two interceptions. R.J. Corbin caught two touchdowns and John Glavin recorded two sacks. Perhaps best of all they held Buffalo to 4-for-18 on third down, 0-for-3 on fourth down and just 245 yards rushing on 32 attempts.

Buffalo got a touchdown from Drew Willy to Naaman Roosevelt and a 20-yard field goal from A.J. Principe. The rest can be left unsaid.

The win also gives Miami at least a tie for a playoff spot, although much more than that seems likely. Buffalo is out.

BOWLING GREEN — Well, a shootout's a shootout. And what a finish, too. BGSU got within first and goal but a big Rene Perry sack on Omar Jacobs knocked them back eight yards and they couldn't spike the ball in time to get one more play.

Nate Davis did throw four touchdowns and for 251 yards on 17-for-29 passing but also was picked off thrice. Dante Love had a game-leading 120 yards on six catches, a touchdown and 2-point pass. Darius Hill, MiQuale Lewis and Briggs Orsbon also all caught a score. Lewis also ran 98 yards on 16 attempts. The defense got four sacks, two by Rene Perry. And Ian McGarvey was a slick 3-for-3 on field goals, long of 36.

Jacobs was actually listed as the playoff of the game, throwing for 421 yards and three touchdowns on 28-for-35 passing. Yeah, that'll do it. Cole Magner led the Falcons with 110 yards on seven catches. TDs went to Steve Sanders, P.J. Pope and B.J. Lane. Pope also had a touchdown running and 84 yards on 19 carries.

It's also unclear by Cardinals backup QB Tanner Justice came in for a series to replace Davis, but he did, going 5-for-6 with 25 yards and led the team to a field goal. So you know.

YPSILANTI — Closer than advertised! Adonis Thomas did most of the work with 153 yards on 24 carries and a touchdown. Morgan Williams ran for 62 yards and a score, and Bernard Reedy caught the lone passing touchdown. Eric Page had a quiet 34 yards on just three catches. And the Rockets defense collected five sacks and two interceptions.

For EMU, they made this close, getting to within four points in the fourth quarter. Andrew Wellock went 3-for-4 on field goals (long of 39, missing from 52) but despite just one play of 20+ yards (an Eric Deslauriers catch, he had 83 yards on six receptions) the Eagles offense was mostly docile. Their lone touchdown came on a Daniel Holtzclaw interception return for touchdown. He also had two sacks. Jason Jones added two sacks and in all the Eagles had six sacks and two interceptions.

Who saw this game being dominated by defense? Gotta love those 2011 Rockets.

TOLEDO — Chester Taylor carried the team with 219 yards on 25 carries and a touchdown. Todd France booted in three field goals, long of 46, and the defense did the rest.

Dan LeFevour hit Antonio Brown for two touchdowns but was just 15-for-27 with 177 yards, two TDs, an INT and a 2-point conversion run. The running corps could only advance 112 yards on 49 carries and the offense went 5-for-19 on third down. Also CMU defensive back Dannie Bolden picked off Tavares Bolden, so that's some hot Bolden on Bolden action.

CMU is now in trouble of getting one of the playoff spots, but the logjam gets thicker as the 2000 Rockets are just a game behind WMU in the Ealey Division.

OXFORD — Ouch, a crucial road loss for the Huskies puts them likely out of playoff contention. The '97 Miami team I had hoped to see finally exploded. Sam Ricketts passed for 323 yards and five touchdowns on 22-for-34 passing. Sly Johnson led the team with 113 yards receiving on three catches. Josh Lubin had 54 yards on two catches and a touchdown. Two scores were each hauled in by Jay Hall and Trevor Gaylor. Travis Prentice added 101 yards on 27 carries and JoJuan Armor added two sacks.

NIU began well enough with a 10-0 lead, then their defense gave up 28 straight points in the span of nine minutes. Shatone Powers led the tema with 109 yards receiving on four catches, including a long touchdown. Michael Turner ran for 88 yards on 21 rushes and a touchdown.

KALAMAZOO — Or should I say Dramalazoo? WMU almost let this one slip away. Jeff Welsh was forced to convert a 4th and 14 with 1:46 to play but found Corey Alston for 15 yards (who made a man miss). A few more plays here and there and Brad Selent knocked a 43-yarder with 0:03 left for the win. This after Akron took the lead on a Bobby Hendry touchdown with 4:49 left in the game but Charlie Frye couldn't convert the 2-point try.

Robert Sanford led WMU with 118 yards on 27 carries and two touchdowns. Welsh was just 15-for-26 with 230 yards, a touchdown and an interception.

Hendry had two TDs and 59 yards on 20 carries for Akron and the team had three sacks. Charlie Frye threw for 231 yards on 20-for-32 passing and was picked off twice.

WMU stays on the inside track for the second spot in the Ealey Division, perhaps winning it. Akron is eliminated from the playoffs.

KENT — So ... this is awkward. The simulator doesn't keep track of who returns punts. They just assign number returned and how many yards. In this one they spit out an actual punt return touchdown. Best I can reckon, Jurron Kelly was their punt returner in 2001. So I'll give him the 63-yard touchdown return ... in spirit. Josh Cribbs threw for 147 yards on 9-for-12 passing and also led the team on the ground (16 carries, 76 yards). That's what optioning it does for ya. David Alston and Chante Murphy ran for touchdowns and Kelly also had 61 yards receiving on three catches.

Temple got 105 yards from Bernard Pierce on 30 carries but still no touchdown and he's got just one on the year. Brandon McManus added to his field goal collection by going 3-of-4, long of 39, missing from 47. 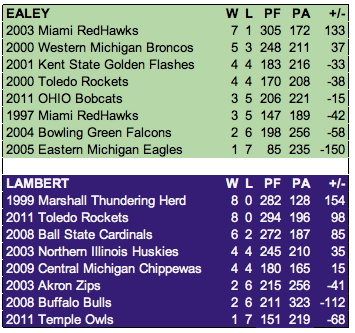