The Marshall-Toledo game was pretty good. Toledo jumps out to a 24-14 lead, and then Marshall cuts the lead to seven with a fourth-quarter field goal. What unfolds next is perhaps not what you expect:

TOLEDO — Really, I don't even know anymore. Either the simulator just loves the 2011 Rockets, or they love more recent teams, or that Rockets team was truly an under-appreciated team unfairly typecast as a bizarre avalanche of points and mayhem. Maybe they really were great.

Eric Page caught eight passes for 65 yards and a touchdown and (presumably) ran back a punt for 76 yards to the end zone. They don't designate who returns punts but I think we all knew this. Adonis Thomas ran 21 times for 107 yards and a TD. Terrance Owens passed 21-for-321 for 284 yards, three touchdowns and an interception. And the defense racked up four sacks and three interceptions.

1999 Marshall suffers its first defeat, either in real life or in this experiment. Chad Pennington had a rocky 25-for-37, 345-yard, touchdown and 3-interception game. Llow Turner ran 13 times for 29 yards and two touchdowns, as well as caught the reception touchdown. After Turner's second rushing touchdown they pulled to within seven in the fourth quarter but then that Rocket offense (and punt return game) happened.

OXFORD — Well, that settles that identity crisis. And I guess I should've truly made this a "neutral" game. But I didn't. Nyah.

For 2003 Miami, Martin Nance caught seven passes for 117 yards and a touchdown, becoming the Player of the Game for that and, I guess, sure. Ben Roethlisberger went 22-for-36 passing, had 253 yards, two touchdowns and an interception. Jared Parseghian kicked 3-for-5 on field goals, long of 42, missing from 33 and 42.

1997 Miami had just 65 yards from Travis Prentice on 29 carries. Sam Ricketts was picked off twice and only threw 199 yards on 17-for-28 passing and a TD. Bryan McCullough sacked Roethlisberger twice and John Scott could only knock one field goal home (33), missing from 48, 42 and 43.

KALAMAZOO — No revenge will be served on this day. WMU beat 'em in 2000 and they beat them 12 years later, this time in overtime. Chester taylor tied the game on a 7-yard run with 2:25 to play, got a timely interception, but couldn't squeeze out a 55-yarder from Todd France. WMU got the ball back and missed a 50-yarder of their own. In overtime France missed a 42-yarder, letting WMU and Brad Selent kick the easy 31-yarder for the win. Their lone touchdown was care of Robert Sanford, notch, with a 27-carry, 116-yard performance. Steve Neal caught six balls for 128 yards and Jeff Welsh had only 206 yards passing on 17-for-29 attempts, being picked off three times.

Toledo's defense did well enough with three sacks and three INTs. Chester Taylor ran it 30 times for 130 yards and a touchdown, also leading the team in receiving yards, catching three balls for 39 yards. Todd France made field goals from 24 and 33 yards but couldn't connect from 43, 42, 55 and 42.

ATHENS — Quite the battle of field goalers. OHIO's Matt Weller and Kent State's Dave Pavich each nailed four field goals, and the lone miss was Weller's 50-yarder which would've won it with 21 seconds left in regulation. Ryan Boykin punched in a 1-yard TD in overtime and Kent State couldn't muster a first down on their possession.

OHIO's Donte Harden kept their team in the playoff hunt with 106 yards on 18 carries and 32 receiving yards on 3 catches.

PHILADELPHIA — A touchdown here, a touchdown there and well really after the first touchdown that's all they needed. MiQuale Lewis ran for two of those, carrying it 30 times for 109 yards. The rest of the offense was held mostly in check. But no real offense for the owls: just a couple field goals and some running by Bernard Pierce (27 carries for 106 yards).

MOUNT PLEASANT — Buffalo almost had a miraculous comeback. With nine seconds to go and 67 yards away from the end zone, Drew Willy hit Naaman Roosevelt for a pass but was tackled at the 22-yard line as time expired.

Dan LeFevour kept the slim dream alive of getting into the playoffs with a 16-for-20, 253-yard game with one passing and one rushing touchdown. Bryan Anderson had three catches for 93 yards and a touchdown, and Antonio Brown had eight rushes for 78 yards and a touchdown, along with 64 receiving yards on six catches. The Chips defense had four sacks, including John Williams with two.

Willy had a swell game: 29-for-42, 355 yards and three touchdowns. Naaman Roosevelt didn't get any of the TDs but he led the team with nine catches for 148 yards. James Starks ran 28 times for 98 yards, adding 42 receiving yards on five catches and a TD.

DEKALB — And the Huskies are eliminated, but what a sour way to go out. But at least shootout games are fun for the whole family! Charlie Frye set a season record with SIX touchdown passes and 411 yards on 25-for-37 attempts and a interception. Mike Brake caught two TDs along with 111 yards on five catches; Matt Cherry caught four balls for 99 yards and two TDs too.

NIU had a 22-for-39, 350-yard day from Josh Haldi who tossed three touchdowns. P.J. Fleck led the Huskies with seven catches for 119 yards and a TD. Michael Turner had a big day: 21 carries, 130 yards, two touchdowns and a receiving TD too.

Kind of strange, too, that down just 45-38 in the fourth quarter with 5:52 to play, NIU opted to punt on 4th and 8 on the Akron 37-yard line. The Zips then ran down the clock and kicked a 45-yard field goal to effectively seal the win.

BOWLING GREEN — After pulling to within 24-21, BGSU got a couple of field goals and put the game out of reach. But this was the finest game for Eastern quarterback Matt Bohnet, who got the rare "Player of the Game" nod despite losing: 24-for-43, 255 yards and two touchdowns. Quite truthfully nobody else had stats worth poring over plus both teams suck in the relative sense so let's just move on. 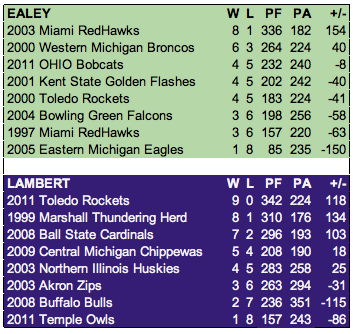