With three undefeated teams left (99 Marshall, '11 Toledo and '03 Miami), two go on the road and one of them has a closer-than-you-think win. Akron and Kent State battle in a virtual Wagon Wheel showdown. And I hate to say it ... but very few close games overall. Still: results! Fake games, and paragraphs about them!

HUNTINGTON — Hot knife through butter. I haven't been computing total yards per game for teams, but 222 yards for UT might be one of our lowest. But Marshall was held to under 30 points for the second time — that happened twice in the actual 1999 regular season.

Chad Pennington was there again, throwing 283 yards on 22-for-32 attempts with two touchdowns and an INT. Doug Chapman ran for 123 yards on 23 attempts, also catching a touchdown, and Nate Poole hauled in seven passes for 117 yards. Billy Malashevich hit 5-for-5 on field goals, long of 49.

A Todd France 32-yarder is all that UT got. Chester Taylor ran 25 times for 99 yards and also led the team in receiving: 3 catches, 40 yards.

TOLEDO — I can't explain why the wild card Toledo team is so damn good, but they're just rolling through everyone, with just a touch of zaniness. This rout of WMU didn't even have anything wacky. Adonis Thomas ran for 150 yards on 24 carries and two touchdowns. Terrance Owens was wonderful with 25-for-30 passing, 290 yards, two touchdowns and an interception. Eric Page caught 10 balls for 89 yards and TDs were caught by Bernard Reedy and James Green. Nine players in all caught passes.

The workhorse they call Robert Sanford ran 32 times for 149 yards and a score for WMU and Brandon Brown added two sacks.

AKRON — The 2001 Kent State team is, I have to say, surpassing expectations so far. They didn't win their Wagon Wheel that year, but they did in 2003.

And the computer just loves Cribbs. Then again, who wouldn't? Josh Cribbs' passing numbers were decent: 8-for-15, 130 yards, two touchdowns and an interception. His running numbers were better: 23 attempts, 120 yards and a touchdown. Jurron Kelly caught both of Cribbs' touchdowns for a total of 35 yards and Antonio King added to his Dream League-leading sack total by two.

Akron's innovative field-goal-and-safety offense wasn't enough, unfortunately. Bobby Hendry had 92 yards rushing on 26 carries and Jason Swiger knocked in 3-of-4 field goals, long of 49, missing from 37. The safety was courtesy of a Cam Yeow sack. All they wrote, unfortunately.

PHILADELPHIA — Ooh, this could've been a standings rattler. Bernard Pierce got his first touchdown of the season with 26 seconds left in the game to bring the score within a possession, but couldn't recover the onside kick. Ben Roethlisberger had another wonderful game for Miami: 27-for-33 passing, 362 touchdowns and four touchdowns. He did have two interceptions, however, tripling his season total. Mike Smith ran for 67 yards and two touchdowns. R.J. Corbin and Calvin Murray each caught two touchdowns apiece and Martin Nance had 107 yards receiving.

Temple got most of their offense from Pierce: 188 yards on 28 carries and a touchdown, along with TDs from Matt Brown and Darius Johnson. Justin Gildea contributed a pick-six as well.

And Miami, the team with the top defense thus far, allowed up the most points in a single game thus far to the team 13th overall in total points. Way closer than imagined.

MUNCIE — Dante Love did it all. He ran in two goal-line touchdowns and caught seven balls for 100 yards. Oh, imagine how this team would've finished had he not been injured midway through. Hard to imagine. MiQuale Lewis ran 96 yards on 16 tries and a touchdown and added 37 yards receiving. Nate Davis passed 22-for-38, totaling 327 yards and a touchdown.

Miami gained 115 yards from Travis Prentice on 23 tries, also catching the ball three times for 30 yards. But alas, the passing game was rather awful; Sam Ricketts went 22-for-36 for just 196 yards and an interception. Gasp— did I make an error in choosing this wild card team?

MOUNT PLEASANT — Well, Dan LeFevour isn't putting up numbers that I thought he would but he's getting it done: 12-for-20, 138 yards, two touchdowns and only 27 yards on 17 carries. Nobody really had great numbers; everything was distributed. Carl Volny and Bryan Schroeder ran for touchdowns while Kito Poblah and Bryan Anderson caught them. Maybe kicker Andrew Aguila is who really separated this game: he knocked field goals from 46, 49 and 50 yards.

BGSU's Omar Jacobs passed 23-for-32 for 232 yards, two touchdowns and an interception. P.J. Pope ran for 110 yards on 19 carries and caught a touchdown.

Their record isn't great, but the Chips are hanging right in there.

DEKALB — Well, it's no 71-3 debacle that the winless EMU team experienced to NIU in 2010, but it's not much better. Michael Turner ran for 181 yards on 36 attempts, scoring two touchdowns and adding 59 yards receiving. Josh Haldi passed 19-for-29 for 259 yards and three touchdowns. P.J. Fleck caught two touchdowns on five catches for 65 yards. And the Huskies defense added six sacks, two by Travis Moore. Adriel Hansbro also returned an interception for a touchdown. Steve Azar kicked three field goals, two from 49 and missed from 55.

EMU's offense came from two Matt Wellock field goals (27 and 37) and missed from 49 yards. Anthony Sherrell ran for 71 yards on 12 rushes and added two caches for 23 yards. And Matt Bohnet remains the only starting quarterback without a passing touchdown — he had 14 in 2005.

BUFFALO — And they're finally in the win column! I knew they weren't this bad. OHIO stopped the Buffalo running game and added four sacks to the cause. Tyler Tettleton passed for 252 yards, four touchdowns and an interception on 20-for-29 attempts. Ryan Boykin had only 56 combined yards but ran for a touchdown and caught two others. Donte Harden ran 22 times for 84 yards and a touchdown, adding 37 yards receiving. On the downside, Matt Weller missed his first field goal of the year, from 41 yards out.

Buffalo didn't get much in the ways of offense but Drew Welly went 23-for-36, throwing 258 yards and a touchdown to Brett Hamlin. The Bulls went 3-for-15 on third down and 1-for-5 on fourth down. 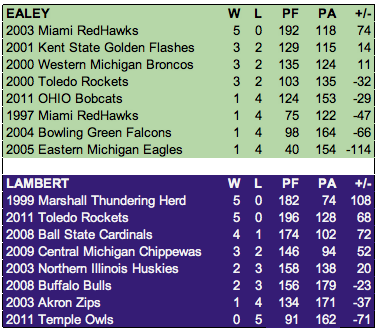 (Note: This week I went back and noticed some win-loss and points for/against discrepancies. The total plus-minus previously didn't equal zero, which is kind of necessary. They've been corrected)