One of the crazy trends I've noticed is that, despite best efforts to level out the divisions with good teams here, bad teams there ... the Lambert Division has asserted itself as the better division. Maybe this means: perceived parity across divisions is never a thing. See, we learn things by doing!

But the big game this week: undefeated 2003 Miami at undefeated 2011 Toledo. Roethlisberger! Page! Lots of points! Well, the game was 27-17 at halftime in favor of the Rockets. See how it ended...

Big games all around. Starting with Terrance Owens, the future Padres draft pick went 22-for-29 with 267 yards, three touchdowns, an interception and a rushing TD. Adonis Thomas ran for 224 yards on 22 carries (!) and added 42 more yards receiving on a pair of catches. Eric Page had nine receptions for 74 yards and three TDs. Topping it off, Ryan Casano went 4-for-4 on field goals, long of 48.

And this must've been Miami's Iowa game. Ben Roethlisberger went 24-for-38, 286 yards, two touchdowns and two INTs. Calvin Murray had 100 yards even on 18 carries with a touchdown. Martin Nance hauled in seven passes for 129 yards and a TD. Larry Burt recorded two sacks. And Jared Parseghian, pride of St. John's Jesuit, went 3-for-3 on field goals, long of 49.

And in the fourth quarter alone, the RedHawks breached UT territory four times but could only account for two field goals.

MUNCIE — Ah, this Ball State run is making me pine for that 2008 season. And the Dante Love numbers. I'm salivating.

This game kicked out a gargantuan game from Nate Davis. He had 397 yards on 22-for-36 passing and two touchdowns. Dante Love had 143 yards on eight catches and a TD. Louis Johnson got 107 yards on three catches. And Ian McGarvey had a 4-for-7 day on field goals, making a long of 50 and missing from 43, 49 and 46.

WMU, again, was Robert Sanford being huge in a losing effort. He eclipsed the 200-yard mark, going 205 yards on 29 carries and scoring twice.

DEKALB — Michael Turner's game was large: 151 yards on 28 rushes and two touchdowns. P.J. Fleck racked up 120 yards on six catches, including a 66-yard touchdown to open the game.

Kent State's lone touchdown was on a 67-yard Gary Magee interception return, which led the team in all-purpose yards. Other than that, just 223 yards of offense. The team also picked off Josh Haldi three times overall, which is nice ... but weird that they could only get 10 points out of all that.

HUNTINGTON — Not a recording: Chad Pennington with another great game. 291 yards on 18-for-30 passing, three touchdowns and an INT. Llow Turner ran for 69 yards on six carries, including a rushing touchdown and also added 43 yards receiving on three balls.

Miami's Travis Prentice went 116 yards on 29 carries and 34 yards on three receptions, scoring a TD each way. MU's Bryan McCullough and Dustin Cohen each recorded two sacks. But this is not going well for the old school RedHawks.

MOUNT PLEASANT — Again, nothing wondrous from the CMU offense, but just enough. Dan LeFevour danned around for 14-for-18 passing, 185 yards and a touchdown. Antonio Brown totaled 72 yards on six catches and Bryan Schroeder ran in the other TD.

A close affair and it looks like field goals made the difference. EMU Andrew Wellock hit a 41-yarder but missed from 51, 44, and a potentially game-tying 58-yarder in the final quarter. Daniel Holtzclaw had the Eagles' two sacks and Dwayne Harrison ran in for the lone touchdown, on 11 carries for 45 yards.

AKRON — And the Bobcats are not out of this! Monster game from Tyler Tettleton: 20-for-24, 209 yards, four touchdowns and 15 carries for 44 yards. Donte Harden had 205 rushing yards on 25 carries and a touchdown; he also caught a TD with 21 yards on three catches.

BUFFALO — Finally, one of those scintillating Omar Jacobs games I remember. The dreadlocked wonder threw for four touchdowns and 305 yards on 22-for-35 passing. Charles Sharon led the pack with 90 yards receiving on six catches. Cole Magner caught two touchdowns on seven receptions for 73 yards. P.J. Pope ran for 122 yards on 21 attempts, adding 46 yards receiving on three catches. The defense accounted for five sacks, led by Jamien Johnson who had two, and even Shaun Suisham did well on 3-of-4 field goals, long of 48 and missing from 48.

Drew Willy had 258 yards on 19-for-35 passing, two touchdowns and an INT. Naaman Roosevelt got 113 of those yards on six catches and a touchdown; James Starks accounted for 150 total yards and a rushing touchdown.

PHILADELPHIA — And everybody's finally won a game. Everybody's happy. Not 2000 Toledo, though. This game was all running, all the time: 460 combined rushing yards, just 242 passing. Bernard Pierce saw 30 carries and ran 104 yards; Matt Brown also ran 15 times for 127 yards, including a 63-yard sprint and a 10-yard touchdown. Temple's Chester Stewart did throw a touchdown, and was only 6-for-8 for 86 yards, but also accounted for a rushing touchdown too.

Chester Taylor ran 28 times for UT, going 127 yards and their only touchdown. 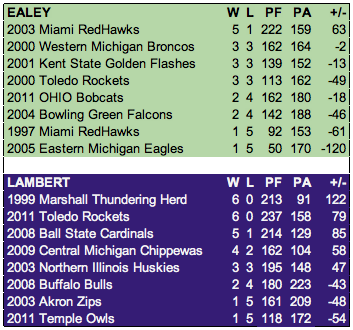